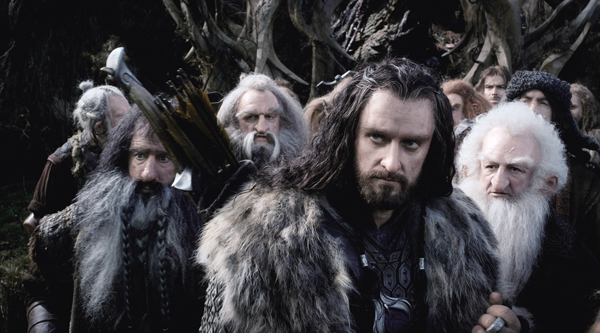 Thorin Oakenshield and the rest of “The Hobbit: The Desolation of Smaug” dwarfed the competition at the box office last weekend. [JoongAng Ilbo]

A small hobbit racked up big sales at movie box offices during the weekend, generating an estimated $205 million at theaters around the world with the debut of the highly anticipated sequel, “The Hobbit: The Desolation of Smaug.”

The second installment in the 3-D “Hobbit” film trilogy earned $73.7 million of its global haul in the United States and Canada, easily topping weekend movie charts.

The situation was the same in Korea, with the movie making more than 7.6 billion won ($7.2 million) from its release on Thursday to Sunday, taking a little more than 37 percent of the box office, according to the Korean Film Council.

However, the No. 2 spot was filled by Korea’s own drama “The Way Back Home,” which took 4.5 billion won in sales from Friday to Sunday and 5.8 billion won since its release last Wednesday.

The third to fifth spots all went to foreign films. Coming in third was the U.K. movie “About Time,” which made more than 3.5 billion won over the weekend. Director James Wan’s “Insidious: Chapter 2” came in fourth, while the animated movie “Cloudy with a Chance of Meatballs 2” was fifth.

Other Korean movies in the top 10 were seventh-place “Marriage Blue,” which added 32,000 admissions to bring its four-week total to 8.3 billion won, and “11 AM” in ninth, which had 17,500 admissions for a three-week total of 6 billion won .

Meanwhile, in the United States, Walt Disney’s animated fairy tale “Frozen” took the No. 2 spot, selling $22.2 million worth of tickets from Friday through Sunday according to studio estimates from Rentrak, beating new comedy “Tyler Perry’s A Madea Christmas,” which was third with $16 million.

“Smaug” is expected to help Hollywood finish the year close to or slightly ahead of its North American (U.S. and Canadian) ticket sales record set in 2012. Through Sunday, estimated sales for 2013 stood at $10.16 billion compared to $10.12 billion at the same point last year, according to Rentrak.