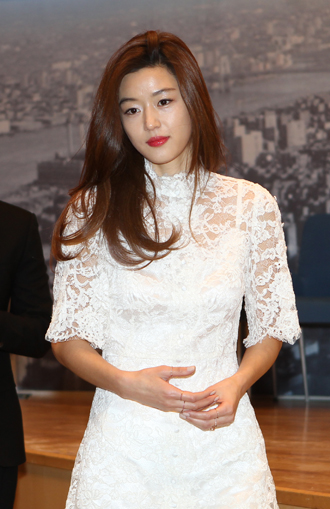 Longtime leading actress Jun Ji-hyun, of hits such as “My Sassy Girl” and “The Thieves,” said yesterday that her imminent return to the small screen - her first TV role in 14 years - has her feeling more nervous than any film has ever made her.

In a press conference yesterday to promote the SBS drama “You Who Came From the Stars,” Jun admitted to being worried.

“It was nerve-racked for my first film,” she recalled. “But I’m more nervous than I was in the movies.”

In the drama, Jun plays a leading celebrity named Cheon Song-e. Her counterpart is actor Kim Su-hyun, star of the MBC drama “The Moon Embracing the Sun,” who plays an alien that has been on Earth for hundreds of years.

The drama focuses on how Cheon and the alien meet and fall in love.

The 20-episode drama will start its run tomorrow.