Samsung vet is appointed to head KT, No. 2 carrier

Samsung vet is appointed to head KT, No. 2 carrier 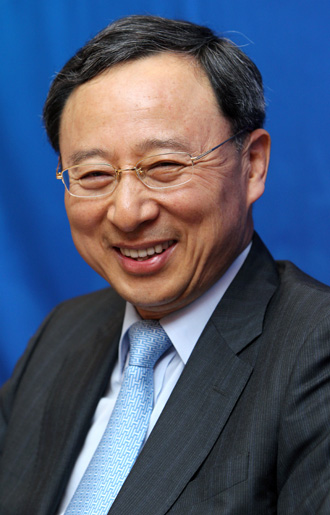 The CEO recommendation committee of the country’s No. 2 mobile service operator picked Hwang, a distinguished professor at Sungkyunkwan University, out of four candidates to replace CEO and Chairman Lee Suk-chae, who resigned.

Hwang, 60, will get official endorsement for the decision at KT’s interim shareholders’ meeting, expected to be held next month. He will lead the No. 11 conglomerate for three years through 2017.

The company formerly known as Korea Telecom drafted a four-person shortlist on Sunday night from around 20 candidates. Including Hwang, they were all non-KT personnel. The other candidates were Kwon Oh-chul, former president of SK Hynix; Kim Dong-soo, former information and telecommunication vice minister; and Lim Joo-hwan former head of the Electronics and Telecommunications Research Institute.

KT said Hwang got high marks for his ability to set a vision and strategies and the drive to realize them. A “global mind” was another merit, it said.

“KT expects that candidate Hwang Chang-gyu, based on his strong points, will not only contribute to KT overcoming its current crisis but also significantly raise the value of the company in the long run,” KT said in a statement.

“He will be able to streamline an organization hit by a vacuum of leadership in management,” it said.

Hwang, who served as president of Samsung Electronics’ semiconductor business between 2007-8, played a key role in vaulting the chip maker to initial global success before the time of smartphones.

He is widely known for a memory chip evolution rule named after him, “Hwang’s Rule.”

But he will be taking on the difficult challenge of turning around the former landline telecom monopoly, which has been stuck in the No. 2 position in the quickly-changing mobile telecommunication industry for years.

KT was privatized in 2002, and none of its shares are currently held by the government. Lee, a former telecommunication minister whose second term was slated to end in March 2015, stepped down in November under what was seen as mounting pressure by the Park Geun-hye administration.

Hwang will also have to shore up a loose organization with little synergy among its many affiliates. KT, which merged with KTF in 2009, has 52 affiliates. Its workforce is 60,000, including the 28,000 people working for its affiliates.