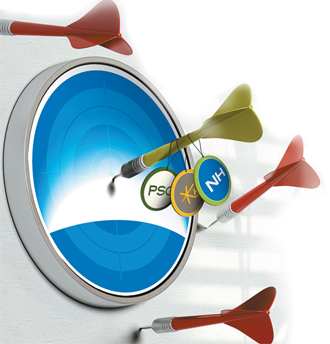 Three final bidders will compete to buy a package of four securities affiliates of the country’s largest financial group, including Woori Investment and Securities, according to industry sources yesterday. They are KB Financial Group, NH Nonghyup Financial Group and an alternative investment firm called PineStreet Group.

The bidding so far has drawn much attention because any merger with the nation’s largest brokerage firm based on total assets would reshape the securities market.

“We have submitted a final bid [to buy Woori Investment and Securities],” an official from KB Financial Group confirmed yesterday. “We’re aware that the results will come out sometime this Friday.”

An official from NH Nonghyup Financial Group also said that it participated in the final bid before yesterday’s deadline. PineStreet Group also confirmed it submitted a final proposal.

Earlier in the day, insiders expected the competition to be between NH Nonghyup Financial Group and PineStreet Group. There was some doubt that KB Financial Group would take part because it earlier expressed interest in acquiring Tongyang Securities when it is sold.

“We are considering various options,” a KB Financial Group official said. “Nothing has been decided as of yet [in regard to Tongyang Securities].”

The price of the package that includes Woori Investment and Securities is estimated to be as high as 1.5 trillion won ($1.4 billion), sources say, and in the preliminary bidding round, KB Financial Group and NH Nonghyup Financial Group wrote down about 1.1 trillion won and PineStreet Group about 1.4 trillion won.

Chairman Lim Young-rok of KB Financial Group and Chairman Yim Jong-yong of NH Nonghyup Financial Group have expressed a strong desire to merge Woori Investment and Securities into their businesses, which are focused on banking.

On Sunday, the government said it would encourage further consolidation by allowing brokerages to enter into new businesses if they make acquisitions. The changes signal Korea’s intent to reshape the securities industry and establish an investment bank big enough to compete globally.

In October, the Financial Services Commission approved five brokerage firms with more than 3 trillion won worth of equity capital to carry out their own investment banking business, allowing them to extend corporate loans and become prime brokers. This is part of the government’s efforts to nurture its own large-scale investment banks. Woori, Daewoo Securities, Samsung Securities, Korea Investment and Hyundai Securities, Korea’s five biggest brokerages by assets, were among the firms to get approval for entering into new businesses.

“Creating the Goldman Sachs of Korea is the eventual goal, though I also know we need to proceed step by step,” said FSC Chairman Shin Je-yoon, echoing a phrase used in July 2011 by then-FSC Commissioner Hong Young-man. “The sale of Woori Investment will be the starting point for industry reforms.”

Korea’s brokerages, which had a combined 300 trillion won in assets as of the end of June, the latest date for which figures are available, lag far behind global rivals. New York-based Goldman Sachs Group had $938 billion at that time, while Nomura Holdings, Japan’s largest brokerage, boasted $422 billion, according to data.

“Size does matter for the Korean brokerage industry,” said Jang Beom-sik, a business administration professor at Soongsil University. “We simply have too many too small brokerages that can’t compete in the global market. The Woori Investment acquisition will be a trigger for much-needed industry consolidation.”

The sale of Woori Investment and Securities may take the government a step closer to creating a national champion by increasing competitive pressure on smaller brokerages, including NH Investment.

“The future will be darker for us if we fail to secure capital and infrastructure competitive with the leading firms,” NH Investment said in an email, without giving details.

NH Nonghyup Financial Group hopes a merger with Woori Investment and Securities would create synergy with its existing business. PineStreet Group, meanwhile, doesn’t own a brokerage.

The government could provide another catalyst for consolidation by selling Daewoo Securities, the country’s second-largest brokerage by market value, according to Yoo Sang-ho, an analyst at HI Investment and Securities.

Daewoo Securities hasn’t considered consolidation since the government hasn’t yet decided to divest, the firm said in an emailed response to questions. The government said in August it would retain its controlling 43 percent stake “for the time being.”

Government efforts to push more mergers and acquisitions in the securities industry come at a time when Korean brokerages’ profitability is worse than it was during the peak of the global financial crisis in 2008. Of 62 companies operating in the nation, including foreign firms, 26 posted losses for the six months ended Sept. 30, with combined earnings plunging 63 percent from a year earlier to 251.6 billion won, according to data from the Financial Supervisory Service.

That’s the worst performance for a half-year since Korean brokerages posted a combined 81.3 billion won loss for the six months to March 2005 in the aftermath of a credit card crisis.

The Woori deal and the pressure on profits, however, may not be enough to persuade brokers to merge, said Lee Seok-hoon, a research fellow at the Korea Capital Market Institute.

“In the history of the U.S. brokerage industry, takeovers happened when markets soured,” Lee said. “Here, the environment for industry consolidation is ripe, but whether it will actually happen is a different matter.”