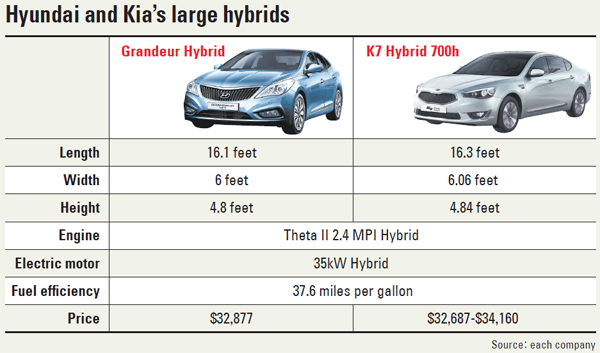 Hyundai Motor and Kia Motors, the nation’s top two automakers under Hyundai Motor Group, are strengthening their hybrid lineup with the addition of full-size sedans.

The hybrid models of Hyundai’s Grandeur (called Azera overseas), and Kia’s K7 (Cadenza) and K5 (Optima) go on sale this week. Although the midsize K5 Hybrid introduced yesterday is an upgrade of the hybrid model that debuted two years ago along with Hyundai’s Sonata Hybrid, this is the first time the premium Grandeur and K7 are available as hybrids.

“We hope to lead the local environment-friendly car market by establishing a hybrid lineup from compacts to full-size sedans,” a spokesman from Hyundai said in a release.

However, Kia has been saying it is considering a hybrid edition of its compact sedan K3 in the near future. The K3 is the next generation of the Forte.

For the release of the two new hybrid models, Kia said it has established a new name. The hybrid edition of the K7 is now called the K7 Hybrid 700h, while the K5 is the K5 Hybrid 500h.

Hyundai and Kia said their full-size hybrid models will expand consumer options, while satisfying environmentally conscious drivers who also want a comfortable ride. The hybrids of Hyundai’s Grandeur and Kia’s K7 get 16 kilometers per liter (37.6 miles per gallon). The two models have Theta II 2.4 MPI Hybrid engines and 35 kilowatt electric motors, which combine to deliver 204 horsepower.

Compared to the Grandeur 2.4 gasoline model, the Grandeur Hybrid can save 980,000 won a year when driven 20,000 kilometers, while the K7 Hybrid 700h can save 1.28 million won compared to the 3.0 gasoline model, the automakers said. Hyundai and Kia also are offering warranties of 10 years, or 200,000 kilometers, for the new full-size hybrids, along with various other introductory promotions.

Hyundai and Kia hope the new hybrids will help turn around declining sales in Korea. Hyundai’s hybrid sales plunged 15.2 percent year-on-year to 13,378 units this year, while Kia saw its K5 Hybrid sales decline 23 percent from a year ago to 7,428 units.

However, in the United States, both companies have had growing success with their hybrids. The combined hybrid models sales by Hyundai and Kia reached 30,948 units in the first 10 months of this year, up 29.9 percent from last year.

According to a report from the Korea Automotive Research Institute, total sales of hybrid vehicles will hit 1.9 million units worldwide this year, exceeding last year’s sales of 1.53 million. Hyundai-Kia was the third-largest hybrid seller last year behind Japanese automakers Toyota and Honda.