Liberal compares trial of UPP’s Lee to purge of Jang

Liberal compares trial of UPP’s Lee to purge of Jang 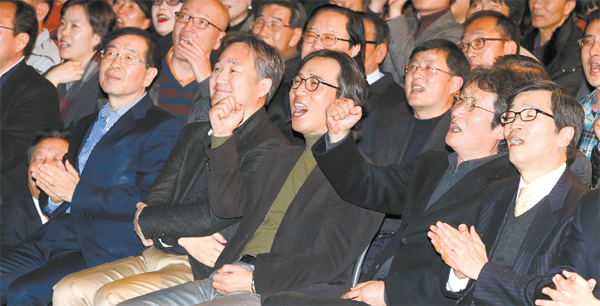 A political firestorm is looming after a prominent liberal politician compared the treason trial of Representative Lee Seok-ki in South Korea to North Korea’s execution of Jang Song-thaek.

Key associates of the late president, including Han Myeong-sook and Lee Hae-chan, attended the event. Representative Moon Jae-in, a former presidential candidate of the Democratic Party and Roh’s chief of staff, did not.

“What I remember most vividly this year is the purge and execution of Jang in the North and the treason scandal of Representative Lee in the South,” Rhyu said. “In my eyes, they are the same.”

Rhyu said North Korea’s leadership used state-run media to control public opinion about Jang and the accusations against him but failed to present actual evidence against him.

“The principle of nulla poena sine lege [no penalty without a law] is common sense in a civilized society,” he said, “but it was completely ignored.”

He likened that situation to the prosecution of Representative Lee of the Unified Progressive Party. The first-term proportional lawmaker is on trial on charges of conspiring to overthrow the government. Last month, the Park Geun-hye administration also took the unprecedented step of trying to dissolve the UPP for its alleged links to North Korea.

“I do not hold Lee in high regard, but let us remember how some newspapers and their TV networks treated his scandal,” Rhyu said. “They were no different from the People’s Daily.”

He also said North Korea was ruled by the “grandson of the Great Leader [Kim Il Sung],” while the South is ruled by “the daughter of the demi-god leader [Park Chung Hee],” comparing the leaders of the two Koreas.

“I am dumbfounded to see him compare the purging of the second-most powerful man in a third-generation dynastic dictatorship with the investigating of an anti-state group to protect this country,” Representative Hong Moon-jong, secretary-general of the Saenuri Party, said yesterday. “I cannot hide my shock because he was once a minister.”

Representative Kim Tae-heum, spokesman of the Saenuri Party, also criticized the Roh faction. “They were the people who invited the pro-North politicians to the National Assembly [through an electoral alliance],” Kim said. “It’s been only a year since they lost the presidential election, but they are restarting their foul moves to create rifts and conflicts.”

Rhyu was once a member of the UPP. He chaired the People’s Participatory Party, which merged with two other minor opposition parties to become the UPP in December 2011. He served as a co-chairman of the UPP before he defected in October 2012 due to ideological differences with its pro-North faction. Another lawmaker, Kim Yong-tae, said in a radio interview, “I am afraid Rhyu’s view was the general perception of the Roh loyalists.”

The main opposition Democratic Party did not make an official comment, but concerns were expressed by insiders. “Rhyu’s remarks were farfetched,” said a veteran lawmaker representing a district in the capital region. “It was an inappropriate comparison. Even when you criticize the president and the administration, there is a line that you must not cross.”

Another three-term lawmaker said Rhyu should have refrained from making such remarks as a former Democrat, for the sake of the Democratic Party.

“He must have felt great for spitting it out and a few who listened to it might have agreed,” he said. “But as a result, he is dividing the liberals.”

Despite the growing criticisms, Rhyu made clear yesterday he had no intention to retract his comments.

“I spoke as an individual, not a representative of the Roh faction,” Rhyu said in a telephone interview with the JoongAng Ilbo. “Why does the ruling party, which controls the majority in the National Assembly, react so sensitively to one citizen’s remarks?”

He said he likened the Jang purge and the Lee scandal because they were handled similarly.

“The North said Jang attempted to overthrow the country, while we accused Lee of conspiring in a rebellion,” Rhyu said. “The North is a dictatorship, so the person in power abuses law while the media brainwash the people. We are a democratic country. But in the Lee scandal, those in power destroyed the rule of law and some conservative media played public sentiment irrationally and undemocratically.”

He also said no one was prosecuted during the Roh presidency for defamation when they spoke differently from the president, but things are different under the Park administration.

“These days, the ruling party often file charges for defaming the president, the prosecution easily file indictments and trials take place,” he said. “It is not appropriate for 21st century Korea in the era of $20,000 national income per capita.”