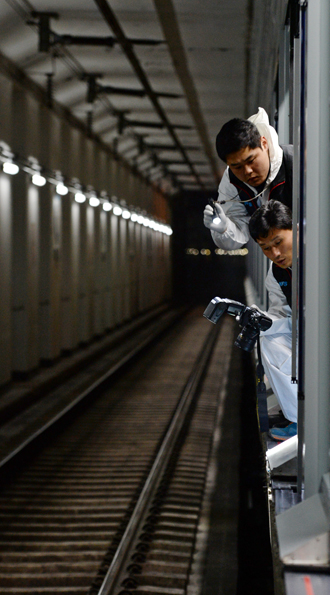 Police examine a platform at Government Complex Gwacheon Station yesterday, where an 84-year-old woman was killed in an accident. [NEWS1]

An 84-year-old woman was killed after her foot got caught in a subway door and she was dragged along a platform late Sunday at Government Complex Gwacheon Station on subway line No. 4.

The incident occurred on the seventh day of a railway strike when a 19-year-old substitute worker was in charge of opening and closing the doors. The substitute, who attends Korea National Railroad College, allegedly failed to properly check the platform before closing the doors, according to Gwacheon Police Precinct in Gyeonggi.

The police are continuing to investigate the tragedy, sorting through CCTV footage.

But the woman’s death has become a flashpoint between the railway workers, who went on strike to protest the launching of a company to run a new KTX bullet train line, and the state-run Korea Railroad Corporation (Korail). The president of Korail attributed the tragic incident to the prolonged strike that entered into its eighth day yesterday.

“The union workers should not push ahead with the strike at the expense of people’s life and safety,” said Korail President Choi Yeon-hye, who has kept a hard line against the strike by temporarily dismissing more than 7,800 striking workers so far.

“And the issues related to management are not considered a subject of negotiation between the union and the company,” she added.

Korail workers have been on strike since Dec. 9 to protest the new operator of the KTX line, which they say is a sneaky way of privatizing the country’s railroads.

Korail jointly oversees the operation of Seoul subway lines No. 1, No. 3 and No. 4 with Seoul Metro.

“It seems that a college student ordered a closing signal without making sure that all passengers were on the train safely,” said Choi Eun-cheol, a spokesperson for the Korea Railway Workers’ Union.

“Such an accident happened because Korail ignored our requests to stop recruiting inexperienced workers,” the spokesperson said, adding that the position requires 50 to 100 hours of training.

A representative of Korail said the students received three days of special training and had taken regular courses at the railroad academy.

As more than 30 percent of the workers have walked, Korail has hired some 6,000 substitute workers.

The young substitute, who is surnamed Kim, is a freshman at the Korea National Railroad College and was part of 238 students dispatched on the request of the railway company.

After the accident Sunday, the college yesterday decided to pull its students out. The decision will likely worsen matters for Korail, which has resorted to cutting freight, passenger and commuter train services.

Korail announced last week that it is set to reduce its bullet train services by 10 percent to 12 percent, halting some 24 of 200 KTX runs during weekdays and 24 of the usual 232 through the weekend, starting today.

Along with the disruptions to high-speed train services, other long-distance passenger services such as express (Saemaul) and regular (Mugunghwa) trains have operated in the 60 percent range since the strike began. The hardest hit is freight transport, which saw service volumes shrink to an average of 36 percent of the normal volume. The cement and bituminous coal industries are hurt the most.

The strike will spread further in the subway system as union members of Seoul Metro, which operates subway lines No. 1 through No. 4, will join the strike tomorrow to support Korail workers.

Seoul Metro announced yesterday it has reduced line No. 3’s schedule by 15 percent. But the reductions will take place in non-rush hours, the subway operator added.

At the heart of the issue is whether splitting off a new KTX line departing from Suseo-dong in southern Seoul will lead to a kind of privatization of Korail.

The union maintains that the new subsidiary, which will be established in the form of a corporation, is destined to open a window for private companies to own its shares, a move that protesters say will undermine public interest in the long run.

The government and Korail counter the argument, saying that they have blocked any private entities from owning the new operator’s shares. Only government corporations will be able to buy them.

Under a proposal passed by the board last week, Korail will own 41 percent of the shares and the rest will be bought by public sector companies.

The move, they say, is also intended to boost competitiveness and efficiency.

President Park Geun-hye weighed in yesterday, calling on the union to stop “a strike that lacks legitimate causes.”

According to a survey by JTBC, the broadcasting arm of the JoongAng Ilbo, 54 percent of people polled believe that the establishment of the new unit will pave the way for privatization.

Amid heightened tension, police decided to seek arrest warrants for 10 union leaders after an emergency public safety meeting with the Ministry of Land, Infrastructure and Transport and the Supreme Prosecutors’ Office.