To Dec. 31: This is a two-person show of French artist Jean Francois Larrieu, 53, and Korean artist Lee Gil-rae, 52.

Larrieu’s acrylic paintings of trees in warm and vivid colors, which seem to be full of the joys of life, are strangely harmonious with Lee’s tree sculptures, made of achromatic copper lines and pipes that seem to strive to live in adverse conditions.

Admission is free. The gallery is open daily from 10 a.m. to 7 p.m. It is closed on national holidays. Go to Apgujeong Station, line No. 3, exit 3 and walk for 15 minutes.

To Dec. 31: The floor of the gallery’s K3 space is full of scattered and stacked objects, including a used and broken car, building materials and neon signs that look like that have been abandoned by shuttered stores. They are part of an installation work by German artist Anselm Reyle, titled “What About Love.”

“I intend to show all the remnants of civilization in an aesthetic way,” the artist said at the gallery late last month, “but I have no environmentalist intention.”

To Jan. 5: This is a solo show for Lee Myoung-ho, a young artist who is well known for his “Tree” series, which are a kind of inverse trompe l’oeil.

In these photos, a tree looks like a life-size photograph or realistic painting of a tree printed on a white screen set up in an empty field - but the tree is actually a real tree with a screen behind it.

In this show, Lee presents his “Sea” series, in which a long white sheet is spread over a desert so that it looks as if it were the sea over a desert, as well as new pieces in the “Tree” series.

To Jan. 12: This is a solo show by Jewyo Rhii, featuring conceptual works inspired from the artist’s daily experiences in her studio in Itaewon-dong, central Seoul. Rhii, 42, stayed in Itaewon between 2009 and 2011 after traveling around the world.

The exhibit includes “Fence,” which she made with various materials that she gathered to protect her studio from intruders. Among the exhibits is also “Moving Floor,” which are wooden floorboards that have small wheels beneath them, making the floor very unstable.

“By actually walking on the ‘Moving Floor,’ the audience can physically experience the anxiety the artist went through in Itaewon,” the museum said. 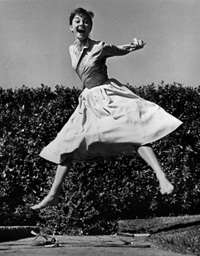 To Feb. 23: This is a solo show of Philippe Halsman (1906-79), who was a renowned Latvian-born American portrait photographer whose pictures appeared on the cover of 101 issues of Life magazine.

According to the organizers, Halsman intended to show the true nature of people and developed a philosophy of “jump photography,” in which he asked his models to jump. The models included famous actresses Marilyn Monroe, Audrey Hepburn and former U.S. President Richard Nixon.

In this exhibition, more than 200 of Halsman’s works are presented for the first time in Korea, along with the props of some of the celebrities in his photos. 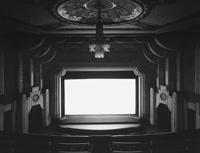 To March 23: This is a solo show of the renowned artist Hiroshi Sugimoto, 65, who has presented monochrome photography that combine “conceptual thinking and formalistic simplicity” for more than four decades.

The exhibition includes not only his famous photographic series “Theaters” and “Portraits” but also conceptual sculptures and a video work based on his “Sea of Buddhas” series. A total of 49 of his works are on display.

Sugimoto has been more of a conceptual artist than a photographer, as he uses photography for his philosophical questions, such as whether photography is the most authentic tool for representing reality and recording history, as we believe.

It is apparent in particular from his “Portraits” series, which was commissioned by Deutsche Guggenheim in 1999, and his “Dioramas” series, which he started in 1975, among the works on display.