LeBron, Heat too much for Jazz

LeBron, Heat too much for Jazz 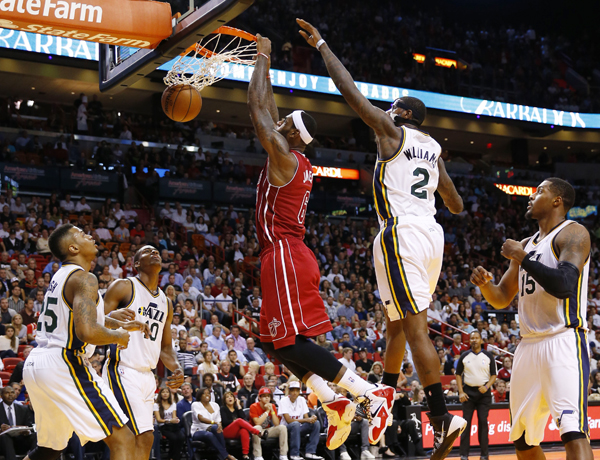 LeBron James finished with 30 points, nine rebounds and nine assists, despite sitting some of the second half after twisting his left ankle, Dwyane Wade added 27 points and the Miami Heat beat the Utah Jazz, 117-94, on Monday night.

It was Miami’s 17th straight victory over a Western Conference opponent, the second-longest regular-season streak by an Eastern Conference team in NBA history. Boston won 20 straight over the West during a nine-month span of 1973.

Chris Bosh scored 20 points for the Heat, who moved within two games of Indiana for the East lead.

Miami plays host to the Pacers on Wednesday.

Alec Burks scored 31 points for Utah, which got 17 from Derrick Favors.

A game in December pitting the two-time defending champions against the team with the worst record in the West wouldn’t seem all that likely to conjure some NBA Finals memories.

Then James lost his headband, and once again, everything started to click for the Heat.

Just like in Game 6 of the Finals against San Antonio this past June, when James had his terry-cloth accessory knocked to the court, something just seemed to change about his game. Miami was up only three points when James went without the headband, and the lead was up to 13 later in the quarter before the Heat settled on a 12-point edge entering the final 12 minutes.

There was still some drama, though. James left late in the third quarter after twisting his ankle on a dribble about 30 feet from the basket. After re-lacing his sneaker - his typical self-inflicted treatment for ankle twists - he wound up getting subbed out a few seconds later. He walked off the court slowly, took a seat on the floor near the Heat bench and smacked his hand on the hardwood with such anger that the hit could be heard halfway up the arena.

During the stoppage between the third and fourth quarters, James didn’t even get up to join his teammates at first, remaining seating with a towel over his head. He eventually got to his feet, draping the towel around his neck and largely keeping to himself, shrugging his shoulders when Bosh approached to ask him something.

But he came in for Wade midway through the fourth, finished the game, and the Heat cruised from there.

Burks made 12 of 17 shots for the Jazz, who found a way to hang around most of the game - mainly because of the strength of their bench. Enes Kanter had 14 points and eight rebounds for Utah, which led by as many as eight points in the second quarter.

Norris Cole scored 13 and Mario Chalmers finished with 12 for Miami.