Manchester City, Barca paired in Round of 16

Manchester City, Barca paired in Round of 16 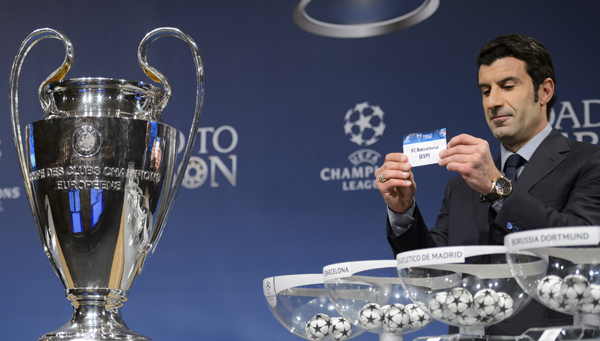 Champions League final ambassador Luis Figo shows a ticket for Barcelona during the draw for the Round of 16 in Switzerland, Monday. [AP/NEWSIS]

Manchester City’s fear of drawing one of Europe’s big guns in the Champions League Round of 16 was realized on Monday when they were handed a daunting tie with four-time winner Barcelona.

Holders Bayern Munich will play Arsenal at the same stage for the second successive season while Chelsea hero Didier Drogba will make an emotional return to west London with current side Galatasaray after Monday’s draw.

Nine-time winner Real Madrid takes on Schalke 04 and last season’s runners-up, Borussia Dortmund, will play Zenit Saint Petersburg, who scraped through with six points after winning only one of their six group games.

“Very tough, we are happy because we are here and we will fight for the trophy, but it’s true that it could be maybe better,” Txiki Begiristain, City director of football who held the same position at Barcelona and spent seven years as a player at the Spanish club, told Sky Sports.

Despite the tough draw, City will take confidence from its strong home form, which has seen them score a remarkable 35 goals in eight home league matches this season, and their win over Bayern earlier this month, although it was not enough to finish at the top of their group.

“Barca is a champion side who is playing with confidence and they have that champion’s mentality, which is going to make it tough for us,” Begiristain added.

“But we are playing well and creating a lot of scoring chances and that gives us a lot of confidence.”

Barcelona shares the top spot in La Liga with Atletico Madrid, and will hope to have striker Lionel Messi comes back from a thigh strain in time for the first leg in February.

The final is at Lisbon’s Stadium of Light on May 24. Reuters