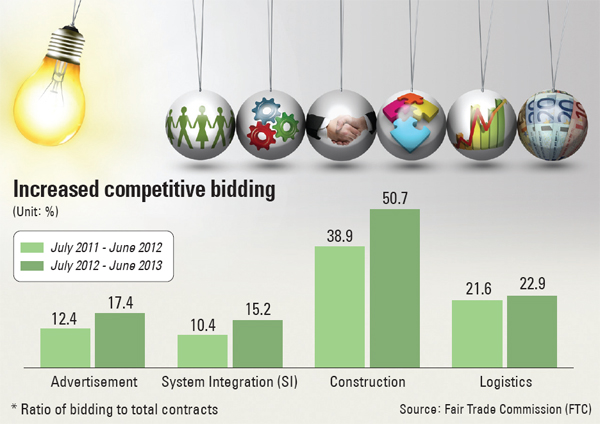 The value of contracts reached through competitive bidding rather than job sharing and subsidized deals among affiliates has increased among the country’s largest conglomerates, anti-trust watchdog the Fair Trade Commission (FTC) said yesterday.

The conglomerates pledged to voluntarily expand competitive bidding and direct orders from small and medium enterprises through so-called autonomous declaration last year, after they were condemned by the FTC for cross-investment, subsidized deals and funneling business to affiliates.

According to the implementation results of the declaration, voluntary efforts have been undertaken to reduce intra-group trading, such as increasing monitoring committees. Direct orders with SMEs have also increased, the FTC reported.

Nevertheless, it was also found that in some major business sectors such as advertising and system integration that unfair work sharing remains prevalent.

In the same period, the share of competitive bidding contracts went from 30.6 percent to 37.8 percent. The share of direct orders with SMEs also expanded from 43.2 percent to 51.6 percent.

During the period, direct orders from SMEs increased 8.6 percentage points, the FTC added.

Work placement through competitive bidding accounted for only 13.3 percent at Lotte and 18.6 percent at Hyundai Motor.

The number of internal trade commissions, whose task is to review the adequacy of these large contracts with affiliates, increased from 42 to 52 this year.