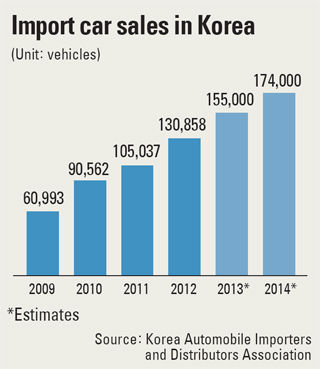 Sales of imported cars will grow 10 percent to 174,000 units next year, according to an estimate from the Korea Automobile Importers and Distributors Association (Kaida) yesterday.

The business group for foreign carmakers and dealers said 2013 sales will likely reach 155,000 units, up 20 percent from a year ago due to aggressive marketing and the rising popularity of diesels.

Kaida said there is no doubt the imported auto market will grow for a while, because foreign cars are becoming products that are not only reserved for companies and the rich but are within reach of the younger generation and other individual buyers.

According to the group’s data, the number of customers in their 20s and 30s has been increasing because of the popularity of small cars with engine displacements of 2,000cc or less. Small cars accounted for 56.4 percent of import sales for the first 11 months of this year.

For sales in 2014, Kaida said the imported auto market will not grow faster than this year because of increasing household debt that has suppressed consumer sentiment. However, the business group cited positive developments, such as tariff reductions from the FTA between Korea and the European Union.

The association also said it is likely the number of new models introduced in Korea will be fewer in number this year but that more diversity could be added to the market with the introduction of electric vehicles (EVs). BMW, the nation’s best-selling foreign brand, already announced it will release its i3 EV in the first half of 2014.

Kaida also said rising competitiveness of domestic cars in some segments could be a threat to growth. The luxury midsize sedan segment is already heating up since Hyundai Motor released its next-generation Genesis last month. Korea’s largest automaker said yesterday that 11,300 units have been ordered, and the new Genesis will challenge the BMW 5 Series, the Mercedes-Benz E Class and the Audi A6.

Hyundai and its small affiliate, Kia Motors, also recently released small diesel sedans like the Avante and K3 to compete with popular foreign compacts like the Volkswagen Golf.

“The imported market for 2014 will be each brand focusing on beefing up its internal stability, such as upgrading after sales service and infrastructure,” said Yoon Dae-sung, executive managing director at Kaida.