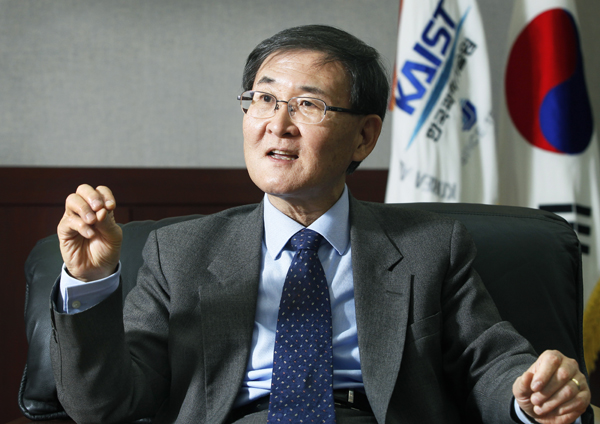 When Kang Sung-mo was sworn in as the new president of the Korea Advanced Institute of Science and Technology (Kaist) in February, the prestigious university was still reeling from a series of controversial reform policies instituted by his predecessor, Suh Nam-pyo.

The controversy came to light following a spate of suicides - four students and one professor in only four months. Suh resigned before his term ended amid allegations that the tragic deaths were partly attributed to his stricter policies.

Among Suh’s controversial initiatives was the removal of Kaist’s usual tuition-free status as a penalty against students whose grade-point average dropped below 3.0 and requiring all courses to be taught in English.

Against this backdrop, the appointment of Kang Sung-mo, a former chancellor at the University of California, Merced, garnered a lot of attention as people wondered whether he would follow his predecessor’s policies.

But Kang said that stiff competition and pressure cannot replace the motivation that comes from sheer intellectual curiosity, signaling that some of the school’s tougher new rules would be relaxed.

The Korea JoongAng Daily sat down with Kang to discuss how he intends to lead the prestigious research university.

Q. Coming in as a new president after your controversial predecessor, how did you try to smooth out the internal friction?

A. There are a lot of people at Kaist with different interests and views. We have students, professors and school personnel. At the same time, it also has ties with the government and public research institutes because it is a public research university. What I tried to do is listen - listening to what they have to say. So, I’ve tried to have as many casual meetings as I can.

What are some of your long-term goals?

It is widely believed that Kaist is the best engineering and science oriented university in Korea. But I want to push beyond that. I’d like to turn it into one of the top performing institutes by global standards. To this end, we need to do a lot of work. We could do better at providing the school with quality equipment that will facilitate research and experimentation. We have some lab rooms, but much of the equipment is a bit old and has not kept pace with the latest developments.

Kaist also needs to bring in more qualified foreign inputs - both professors and students - to the campus. And that requires the infrastructure to accommodate them. But Daejeon doesn’t have the required infrastructure; we have only one international school and it’s a Christian school. So, if a would-be faculty member isn’t a Christian, the chances are he or she won’t come to Kaist.

Therefore, I will work on improving the surrounding facilities in this regard. I’m going to stress the need when having a meeting with the education superintendent.

Many wonder if you will keep the reform policies in place. How are you going to deal with the controversial school rules introduced by Suh?

Kaist students are really brilliant. They are usually the top or No. 2 students from their high school classes. But when we put those excellent students together, they cannot all be top students. So, when students get lower grades or rankings than they once did, they feel really stigmatized. And if their lower grades translate into an additional financial burden, they will feel more depressed and worry whether their grades are lower than 3.0.

If they are too concerned about this, they will likely choose easier courses to gain better grades - that would amount to a loss of our national treasures and the better scores are meaningless. I don’t think this is the right way.

I’d like to gradually relax the grade penalty and ease that burden, both emotional and financial. The bar is now 2.7 and we reduced the amount of tuition fees that students should pay.

How about the policy that required courses be taught in English?

I think teaching courses in English is a great way to keep pace with the increasingly globalized world. But we should think about whether both professors and students are prepared for that. Some professors and students say that the rule hampers them from discussing lectures in depth. But, as I said before, Kaist needs to attract talented professors and students from around the world to be more competitive. So, we will adopt courses taught in English more gradually, rather than enforcing them as mandatory. I’m also thinking about incentives for professors who perform successfully on their courses. It would take a while to be accustomed to English courses, but we need to form some kind of basis or ideal climate before going all-out.

The program is aimed at instilling a spirit of innovation and entrepreneurship throughout the campus by offering a variety of courses and lectures on entrepreneurship, technology management, intellectual property and venture capitalism. This doesn’t necessarily mean that all students involved in this program should jump into running start-ups. But we’d like to help them develop an innovative mindset and curiosity, which is also important in any academic discipline.

So, we put together all the related programs and services dedicated to assisting students create start-ups, and we are now able to support the full cycle of venture activities by students and professors.

Kaist plans to cooperate with science and technology research, development and business complexes in Daejeon and then expand the start-up program to the global community.

Is there any specific field that you’d like to develop?

I am interested in integrating scientific fields that link medical research with engineering technology. I think this is where our future hope lies. Kaist now doesn’t have a medical school, so research in health sciences has not been very active. But we do have a Graduate School of Medical Science and Engineering, which is more academic-oriented. I’d like to encourage collaborations with other schools to get ahead in the health science field. In order to facilitate research in the field, Kaist plans to build a new science and medical institute in Sejong City. I hope the new building will significantly improve Kaist’s involvement in health science.