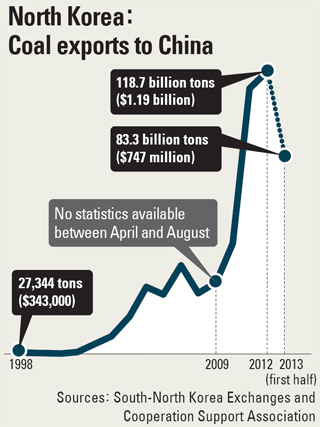 Jang Song-thaek, the powerful uncle of North Korean leader Kim Jong-un who was executed on Thursday, was involved in a power struggle among the inner-circle elites over a coal business, a high-ranking South Korean government official told the JoongAng Ilbo yesterday.

The official acknowledged that there were various reasons for Jang’s purge, including his defiant and factional activities against the ruling Workers’ Party, but the political battle surrounding the lucrative business was also a factor in his death.

“In North Korea, it is seen as a sign of power to have control over the coal export business, which has risen as the most profitable foreign-currency business after the succession of new leader Kim Jong-un,” the official said.

On Dec. 8, when the regime’s Korean Central News Agency reported on the ruling party’s Political Bureau meeting in Pyongyang - in which it was decided that Jang would be ousted from the party - the official media outlet stated that Jang “sold the nation’s precious resources at a cheap price, an anti-state activity that resulted in barring us from upholding the legacy of our dear leader [Kim Il Sung] and general [Kim Jong-il] to develop the fertilizer and synthetic textile businesses.”

The KCNA did not specifically mention what the “precious resources” were; however, a Dec. 11 article by Vice Premier Jon Sung-hun that appeared in the Rodong Sinmun, the official newspaper of the ruling Workers’ Party, claimed that “Jang Song-thaek’s group sold our nation’s precious resource - coal - at a cheap price.”

Jun, who is in charge of the economy, also blamed Jang for operational disruptions at several of the regime’s fertilizer plants, with his export of coal leading to a lack of fuel to run the factories.

“Take a look at the two fertilizer factories of Hungnam and Namhung,” he said. “They could have produced more [products] to be dedicated to the growth of production of our grains.”

According to statistics from South-North Korea Exchanges and Cooperation Support Association, the export of North Korean coal to China has steadily increased since last year, from 27,344 tons in 1998 to about 11.87 million tons in 2012, with North Korea earning about $1.19 billion in 2012.

When Jang was convicted at a military tribunal on Dec. 12, the judge read his verdict, stating that Jang had been “deceived by [brokers], selling natural resources at a cheap price, resulting in massive debts,” according to the KCNA.

Jang “also sold our land in the Rason Special Economic Zone abroad to be [used] for the next 50 years,” the judge was quoted as saying.

Among other things, Jang was tasked with coordinating economic ties with China. In August 2012, he led a delegation to Beijing to discuss the development of the Rason Special Economic Zone, which he headed.

“The companies managed by Ri Ryong-ha, the first deputy director of the Administrative Department, and Jang Su-gil, a deputy director of the department - who were both close aides to Jang, executed last month - mostly exported minerals or fisheries abroad,” said Cho Bong-hyun, a research fellow at the IBK Institute. “The regime was able to recoup some of the profits lost in the deal with [the Chinese brokers].”