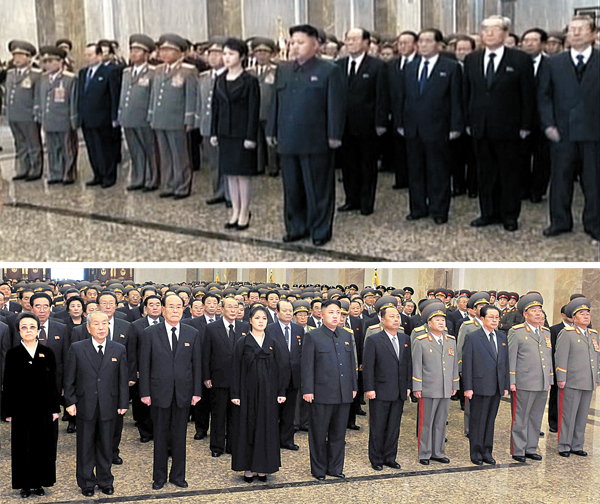 North Korea’s ruling Workers’ Party held a meeting yesterday at the Pyongyang Indoor Stadium to commemorate the second anniversary of the death of former leader Kim Jong-il, and the new inner circle of his son Kim Jong-un could be discerned.

Jong-un’s aunt Kim Kyong-hui, whose husband, Jang Song-thaek, was purged and brutally executed last week, did not make an appearance, although she is believed to have been spared from her husband’s fate.

South Korean lawmakers told reporters that Kim Kyong-hui, a ruling party director in charge of light industry, apparently tried to dissuade her nephew from executing her husband on Dec. 8 but failed. She is reportedly ill and her whereabouts are unknown.

The one-hour meeting commemorating the second anniversary of Kim Jong-il’s death was broadcast live by the North’s official Korean Central Television. Afterward, with his wife Ri Sol-ju, Kim Jong-un paid his respects at the Kumsusan Palace of the Sun, where his father’s remains lie in state. The aunt did not appear there either, according to a list of visitors released by the state media.

First lady Ri has not appeared for the past two months amid rumors she could have been involved in the purge of Jang, who reportedly had connections with Unhasu Orchestra, which she performed in.

At the party meeting, Kim Jong-un sat at the center of the stage, and top officials from the ruling party and military were seated to his left and right.

According to an analysis by South Korea’s Ministry of Unification, the young leader has replaced 44 percent of his senior party, military and cabinet officials over the past two years.

When his aunt Kim Kyong-hui attended last year’s commemoration, she sat to the right of the leader in the third seat, following two senior assemblymen in North Korea: Kim Yong-nam, chairman of the Presidium of the Supreme People’s Assembly of North Korea, who was to Kim Jong-un’s right, and Choe Yong-rim, honorary vice president of the assembly.

This year, her seat was filled by Hwang Sun-hui, head of the Korean Revolution Museum, who is a former anti-Japan Communist fighter. The seat to the right of Kim Jong-un was again taken by Kim Yong-nam, the assembly chairman. But to his right was Pak Pong-ju, premier of the cabinet, who is viewed as a rising economist.

To the left of Kim Jong-un were a string of high-ranking military officials and several party officials in charge of security.

The most notable figure sat directly to Kim’s left, Choe Ryong-hae, the director of the General Political Bureau of the army.

Some analysts in Seoul think Choe triumphed over uncle Jang in a power struggle, while others think Choe doesn’t have the power Jang had.

Choe, 63, is relatively younger than other senior military officials, who are in their 70s. Despite relatively little experience in the military, Choe was promoted to director of the General Political Bureau, which is in charge of the supervision of soldiers.

He even visited China in May to meet with Chinese President Xi Jinping as a special envoy of Kim Jong-un.

In a speech at the meeting, Choe swore loyalty to the young leader who appointed him to the top military post, saying he would “grow as the forefront fighter and share the same fate as the respected great comrade [Kim Jong-un].”

Ri Yong-gil and Jang Jong-nam were reportedly promoted due to their ties to Choe Ryong-hae.

Several figures who were considered close to the executed Jang appeared at the meeting yesterday, surprising analysts. They included Mun Kyong-dok, a party secretary; Choe Pu-il, minister of People’s Security; and Ro Tu-chol, the vice premier.

During the funeral for leader Kim Jong-il two years ago, seven figures accompanied his hearse, including uncle Jang and military chief Ri Yong-ho, seen as the most powerful men under the new, young, hereditary leader.

Yesterday’s list of the attendees at the second anniversary shows only two of the seven figures are still in positions of power: Kim Ki-nam, a party secretary in charge of South Korean affairs, and Choe Thae-bok, the chairman of the Supreme People’s Assembly.

“Although there are a lot of rumors about people close to Jang Song-thaek seeking asylum, we have not confirmed them so far,” a Ministry of Unification official told reporters. “The second anniversary meeting is a clear opportunity to confirm the current power elite under the rule of Kim Jong-un.”

In the wake of the purge of Jang and the political turmoil it suggests, the regime could attempt some military attack on the South to help stabilize the rule of the young leader.

“North Korea is likely to make a provocation between late January and March,” South Korea’s Defense Minister Kim Kwan-jin said in a video conference with high-ranking military officials yesterday. “The execution of Jang Song-thaek could become a significant turning point in the entire 68-year history of North Korea.”