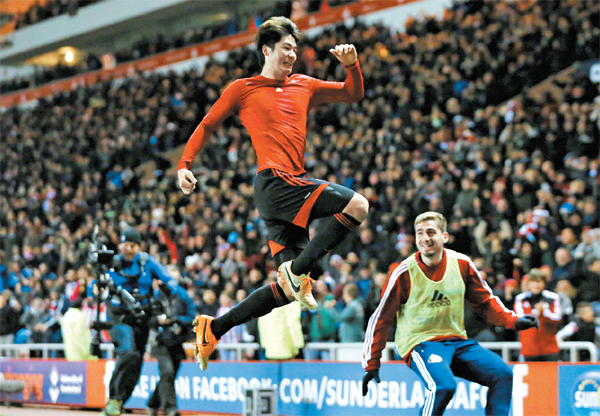 LONDON - Ki Sung-yueng drove in an extra-time winner to take the Premier League’s bottom club Sunderland into the League Cup semifinals with a dramatic 2-1 victory over Chelsea on Tuesday.

Ki smashed home in the 118th minute after being teed up by Fabio Borini, who had come off the bench to force extra time with an 88th-minute equalizer.

In the night’s other quarterfinal, Edin Dzeko scored twice as Manchester City booked their place in the semifinals with a 3-1 win at second-tier Leicester City.

“I can’t believe what I just did,” Ki said. “I’m very happy that I have contributed to the team’s great victory tonight.”

Chelsea, third in the Premier League, looked on course to reach the last four after taking the lead when goal-line technology adjudged that a combination of Frank Lampard and Sunderland’s Lee Cattermole had bundled a cross over the line.

But they were pushed back two minutes from time when on-loan Borini steered an expert finish past two Chelsea defenders from a tight angle on the line.

The hosts then laid siege to the Chelsea goal and were rewarded two minutes from time when Ki smashed home a low drive, sending the home crowd wild.

Chelsea won the competition twice in Jose Mourinho’s first spell with the club, but with a busy holiday schedule coming up in the Premier League, they made eight changes from their weekend team.

The fringe players, however, did little to push their cases, and they found themselves chasing possession for much of the opening 45 minutes before taking the lead a minute into the second half.

A low cross from Cesar Azpilicueta picked out Lampard and Cattermole sliding in at the far post. The ball eventually bobbled over the line before goalkeeper Vito Mannone clawed it clear.

Referee Anthony Taylor pointed to his watch to signal the goal had been awarded by the Hawk-Eye technology installed at the ground.

The match looked to be heading toward a routine victory for Chelsea before it was brought to life in the 88th minute after the introduction of Borini.

The ball bounced free to the Italian, on loan from Liverpool, and he steered it accurately into the net from a tight angle.

Borini almost won it but his effort was expertly blocked by Gary Cahill; he, perhaps, should have performed better at the start of extra time when he failed to make proper contact with a deep cross, unmarked at the far post.

Yet Sunderland was not to be denied, and after Chelsea’s stand-in keeper, Mark Schwarzer, produced a superb save to turn over a header from Ki, the South Korean latched on to a pass from Borini, cut inside and drove the ball low into the net.

“This gives us momentum going into Saturday [against Norwich] and keeps the season alive,” Cattermole told Sky Sports.

“The priority is always the league. We played extra time but this win gives us some belief.”

Dzeko made his case for a more regular starting spot in City’s star-studded lineup with goals either side of halftime after Aleksandar Kolarov had given the visitors an early lead.

“We had a very good first half, and then we had the possession and dominated the game until they scored. It is an important competition, it is important to win every game you play in and to get to the final at Wembley would be wonderful for the supporters,” Manchester City boss Manuel Pellegrini said.

“I think the Capital One Cup is different than normal because we could have Tottenham and Manchester United also in the semifinal so that would be beautiful for the fans.”

Stoke City hosts Manchester United and Tottenham Hotspur - which is currently without a manager - takes on West Ham United in the last two quarterfinals on Wednesday. Reuters