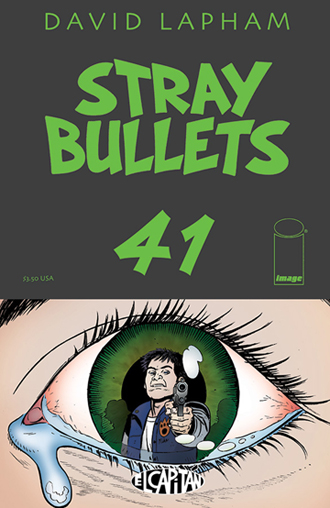 This cover image released by Image Comics shows David Lapham’s “Stray Bullets,” which is returning to comic shelves in March 2014 with issue No. 41 to conclude the series. Is also being followed by a sequel “Stray Bullets: Killers” and an omnibus collecting the entire first series in print and digital formats. [AP/NEWSIS]

Nearly eight years after its last issue, “Stray Bullets” is headed back to comic shops with a final story, a sequel series and a one-shot omnibus collecting all 41 issues of the seminal title created by writer and artist David Lapham.

Image Comics, home to numerous creator-owned titles, including “The Walking Dead,” said Tuesday the series’ return is set for March. Lapham, who has been writing other comics in the interim, called it the right time to bring the story to audiences old and new.

“Stray Bullets,” he said has “always been home to me,” and during the time off he’s sparked new ideas for the series that sees him not just wrap its first, complete arc with issue 41, but move on to “Stray Bullets: Killers,” too.

Both issues, along with the omnibus, will be released March 12 in print and through digital storefronts, too, Image said.

Lapham said Monday that he halted the series in 2005 to raise a family, along with other “priorities that prevented us from giving it that 100 percent commitment.”

In the interim, though, he said the title was never far from his mind, even as he wrote Vertigo’s “Young Liars” and penned titles like “Terror Inc.” for Marvel and “Kull” for Dark Horse Comics.

“I’ve always been, through the years of doing other works and others, I’ve always had this on my mind and ideas,” he said, deciding that the time was right for the return and that Image would publish the books.

“Over the years, since we stopped, we’ve had a lot of really great offers from lots of companies to do ‘Stray Bullets’ and it just never clicked with us,” he said.

“Obviously, [issue] 41 wraps up the things that were going on ... and then, coming to ‘Killers,”’ there will “some new themes and new ideas that are going to start again,” he said, adding he wanted “to start fresh.” AP