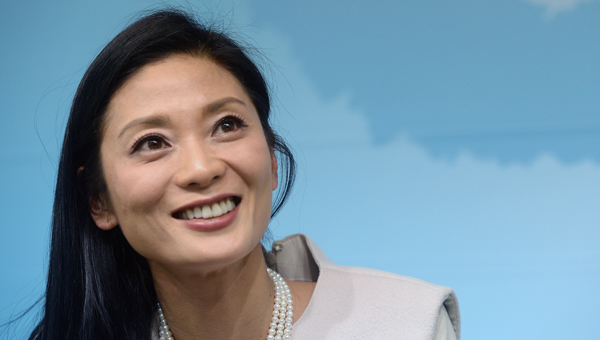 Internationally renowned prima ballerina Kang Sue-jin speaks about her ambitions as the new artistic director of the Korean National Ballet yesterday at the Ministry of Culture, Sports and Tourism in central Seoul. [NEWS1]

Ballerina Kang Sue-jin, 46, who will officially start work as the artistic director of the Korean National Ballet from Feb. 2, says it was a gut feeling that told her to take the position, even though doing so meant she would likely have to cancel some of her international performances.

“I’m not a person who always follows my sixth sense,” said Kang during a press conference at the Ministry of Culture, Sports and Tourism yesterday. “But this time, I strongly felt my sixth sense telling me ‘It’s now or never.’?”

Kang says she was asked several times many years ago to take the position, but she turned it down because she didn’t have that “gut feeling” like she did this time. This time, though, she quickly said “yes.”

“That hunch was so strong that it even surprised me,” Kang said. “I think such an intuition only comes to people once or twice in their lifetime. For me, that feeling was as strong as what I felt when I knew the man I was dating was to be my lifelong partner.”

Not one to hide her abilities, Kang said that becoming the artistic director of the Korean National Ballet was “such good news for Koreans.”

“That’s because you will now have so many Korean ballerinas you can fall in love with,” she said. “My goal is to make each one of the dancers in the Korean National Ballet shine, whether they are a principal dancer or a soloist, or even in the ensemble. If each one of them gives off a twinkle in their own way, I believe the Korean National Ballet as a whole will shine and really become the ‘national’ ballet company.”

For next year, Kang’s plan is not to push the dancers to practice longer hours or bring in great works that have never been performed in Korea. Instead, her focus will be getting to know the dancers and the staff who comprise the Korean National Ballet.

“I know so many people are anticipating what I’ll do and what kind of changes I’ll bring to the national ballet company,” said Kang. “But 2014 for me will be spent getting to know each and every member of the Korean National Ballet. I believe this process is crucial because I have to really know each and every one of their characteristics and find their strengths and weaknesses to make them shine. Pushing them to do something better without really understanding the dancers will not result in any development.”

Although Kang will officially begin her role as artistic director in February, she will continue to perform on stage. She plans to retire from her position as the principal of the Stuttgart Ballet in 2016.

“I know some people have concerns how I will manage the ballet company while working abroad, but I can confidently say that I will not let people down,” said Kang, insisting that her experience as an active ballerina for the first couple of years will help the dancers as well.

“As an active ballerina and an artistic director, I can show them how to better do certain ballet techniques or how to express certain moves better, in their own language,” she said. “I’ve met so many dancers around the world. Whenever I gave them tips by showing them how to do this or that, I’ve noticed that some of those tips and advice for the dancers were life-changing.

“I know there are concerned voices, but I’m sure and I’ll make sure that working both as a ballerina and as an artistic director of a ballet company is a benefit and not a harm.”