In Japan, groups of female divers known as the ama have been getting a lot of press coverage lately.

First, a showcase presenting the divers was held on Sept. 5 and 6 in Mie Prefecture. Then, on Sept. 14, the French newspaper Le Monde published a front-page story about them, titled “Au Japon, la disparition des ‘femmes de la mer.’”

Some believe the coverage was an attempt by Japan to have the ama registered as an Intangible Culture Heritage of Humanity because Unesco’s headquarters are located in Paris.

A month later, Representative Lee Sun-hwa, a member of the ruling Saenuri Party who represents Jeju, visited Mie and said she couldn’t help but notice the posters and banners promoting the ama around the city. There were also ama stamps on sale, and it was clear that the effort wasn’t restricted to just one district.

Seeking to further promote the cause, Mie Prefecture and seven other prefectures established an Ama Culture Preservation Group, which officially launches next month. The group will try to register the ama on the state-designated cultural property list, then attempt to register for Unesco’s designation in March.

The Korean Consulate General in Nagoya said, “Japan has professed it will register the ama and haenyeo together as a Korea-Japan heritage, but secretly it will try to register just Japan.”

This strategy may undermine Korea’s efforts since 2007 to put the haenyeo, the Korean word for the female divers, on the Unesco list.

There is a battle raging between the two nations over the matter. Korea started the movement, although it was a slow process. But now Japan is leading the way with the backing of eight prefectures and the central government. It seems that the ama, rather than the haenyeo, will be deemed an intangible heritage.

Since April, an NHK drama about the lives of the ama has been airing each morning, and it boasts a 20 percent viewership rating. The sudden interest in the ama in Japan is a source of concern for Koreans working for the cause. Last month, the National Assembly held a public hearing about registering the haenyeo with Unesco for the first time.

“Until now, Jeju has worked hard to register the haenyeo as an Intangible Cultural Asset, but because of budget deficiencies, it was never actualized,” said Representative Gil Jung-woo, who called for the hearing. “Like Japan, which has gotten behind its female divers, we need more support from the government.”

Experts have long marveled at the divers that would, “as far back as the era of the Three Kingdoms, without any rubber suit, plunge into the ocean all throughout the year.”

Gil added that as far as intangible cultural heritages go, the women who work so hard to feed their families were “more than qualified” to make it on to the list. 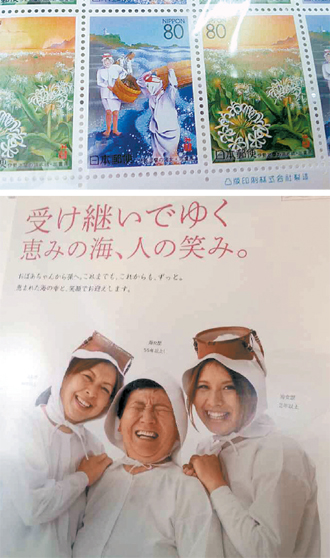 In Japan, there are stamps, top, and posters to increase awareness of the ama. By Lee Sun-hwa

A subject of wonder

The strength of the haenyeo has long been the subject of marvel for foreigners.

In the 1960s, the U.S. Air Force commissioned Hong Suk-gi, a medical science professor from Yonsei University, as well as other researchers to find the secret behind the divers’ ability to plunge so deep into the ocean. The knowledge was thought to be useful for survival for pilots who crashed into the ocean. The Air Force was impressed by the way the haenyeo were able to dive into the sea even during winter and stay there. Because of this interest, other nations and scientists researched the haenyeo from the 1960s to the 1980s. Most reports from this time singled out the haenyeo over their Japanese counterparts. This was because the Koreans were better divers, according to Park Yang-sang, a former professor at Kosin University in Busan.

“The haenyeo have this cold acclimatization ability that has never before been observed in a professional group. This has been verified in academia,” said Park, adding that he was sure that this ability would never be surpassed.

Park said the women had a higher tolerance for cold water and were able to withstand temperatures 2 to 4 degrees colder than the average person. Also, their basal metabolic rate (the amount of energy expended daily by humans at rest) is 30 percent higher than the average person. It’s because of this that the haenyeo are able to dive into water with temperatures ranging from 7 to 10 degrees Celsius (45 to 50 degrees Fahrenheit). Park said that the Japanese ama don’t have this ability and thus dive only during the spring and summer.

There are many differences between the ama and haenyeo. The haenyeo work alone while the ama work in pairs with a 2- to 3-meter-long (6- to 10-feet) rope joining them to a buoy - and they take turns submerging. The haenyeo don’t attach themselves to a buoy. Further, many ama dive from boats that are usually sailed by their husbands, while the haenyeo dive without any assistance.

Increasingly in Japan, there are more male ama surfacing, while in Korea it is an exclusively female occupation.

“Because Japanese waters are warmer, men with low subcutaneous [beneath the skin] fat are able to work as the ama,” said Park. “This again shows that Korean haenyeo have tougher working conditions.”

Hong Kyung-ja, who has been a haenyeo for 50 years, agreed: “Jeju haenyeo are of better quality than the Japanese ones, The Japanese ama stems from the Jeju haenyeo.”

Lee is hoping that the Unesco recognition will stop the extinction of the cultural heritage.

“Once listed, there will be greater interest in the haenyeo and with more funds, it will be stabilized,” she said.

But, she added, the problem is that “a nation is able to register just one [cultural heritage] per year,” and the government is looking to register lantern festivals, traditional mask plays and others.

“At the latest, by March, the Cultural Heritage Administration needs to register the haenyeo for Unesco,” said Lee.

Gil said Korea also needs to watch out for Japan’s pursuit, while a source from Unesco said that “while the qualifications of haenyeo has been proven time and time again, it is up to the Korean government to get behind the cause with monetary and legal backing to show how serious it is about getting the women listed.”