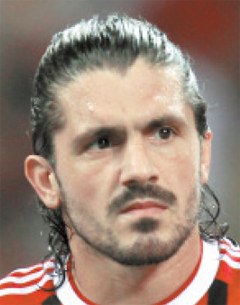 Former Italy international and AC Milan midfielder Gennaro Gattuso is under investigation on suspicion of being part of a match-fixing operation affecting dozens of Serie A games, justice system officials said on Tuesday.

Police also arrested four individuals in connection with the case, which is believed to have involved more than 30 matches stretching back to 2009.Gattuso, a World Cup winner with Italy in 2006, denied any connection with match-fixing and said the accusations were "absurd."

"I'm angry and offended," he told SportMediaset television. "I don't even know how you would fix a match. I don't know how you'd go about it," he said.

Gattuso, 35, twice won the Champions League with Milan. He was sacked as manager by Serie B Palermo in September after a string of bad results. Former Lazio, AC Milan and Inter Milan player Cristian Brocchi is also being investigated, officials said.

"It was a big surprise, we're all quite shocked. I've known Cristian for years and I think he's got nothing to do with any of this," Brocchi's agent, Davide Lippi, told Sky TG24 television. "Cristian is calm about it," he said.

Cremona chief prosecutor Roberto Di Martino said that investigators had identified telephone and SMS contacts between go-betweens and a number of players or individuals connected with teams before matches.

The latest arrests and searches come after a three-year investigation that has produced evidence of an organized system among former and current footballers, sports-betting operators and others to manipulate the result of dozens of matches. Prosecutors say bets worth tens of thousands of euros, and in some cases hundreds of thousands, have been placed on the top-flight Serie A and Serie B matches.

The investigation was triggered by a second-tier Serie B match in Cremona in 2010 which aroused suspicions that led to a wider probe. Former Lazio and Italy striker Giuseppe Signori was banned for five years and 15 other players have been suspended for between one and five years for their part in the scandal. Reuters