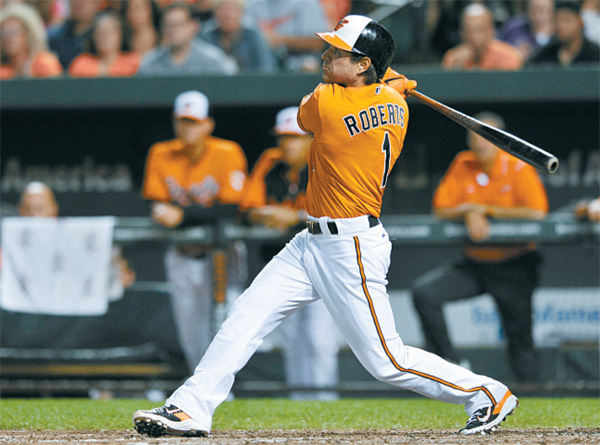 In this Aug. 17 file photo, Brian Roberts of the Baltimore Orioles hits a two-run double against the Colorado Rockies in Baltimore. Roberts is said to have agreed to a 2 million dollars, one-year contract with the New York Yankees. [AP/NEWSIS]

Making a pair of thrifty deals to fill holes on their roster, the New York Yankees agreed to a $2 million, one-year contract with second baseman Brian Roberts and a $7 million, two-year deal with left-hander Matt Thornton. The deals are contingent on the players passing physicals, a person familiar with the agreements said Tuesday, speaking on condition of anonymity because the contracts were not final.

Roberts is among the options at second base to replace Robinson Cano, who left the Yankees for a $240 million, 10-year contract with Seattle. Kelly Johnson, signed to a $3 million deal, is another possibility.

His injury problems started in 2010, when he missed most of spring training with a herniated disk in his back, then strained an abdominal muscle in the fourth game of the season while stealing second base against Toronto.

Roberts came down with pneumonia and didn't return until July 23. Then he missed the final six games of the season because of a concussion sustained when he knocked himself on the batting helmet with his bat after striking out in the ninth inning at Tampa Bay on Sept. 27 that year.

Roberts had another concussion while sliding into first base against Boston on May 16, 2011, and didn't return until June 12 the next year. He appeared in just 17 games due to season-ending hip surgery in August and had another operation for a sports hernia in December.

His total of 77 games last season was his highest in four years, and he hit .249 with eight homers and 39 RBI. Roberts strained his right hamstring while stealing second base in Baltimore's third game of the season April 4 and was sidelined until June 30.

Thornton, 37, replaces Boone Logan, who left for a $16.5 million, three-year contract with Colorado. A 10-year big league veteran, Thornton was 0-4 with a 3.74 ERA in 60 relief appearances this year for the Chicago White Sox and Boston, which acquired him in July for minor league outfielder Brandon Jacobs.

Thornton made $5.5 million in each of the last two seasons, and the Red Sox declined a $6 million option, which included a $1 million buyout. His agreement with the Yankees was first reported by the YES Network.

When the agreements are completed, along with a pending three-year deal with outfielder Carlos Beltran, the Yankees' projected luxury tax payroll for 2014 will rise to $177.7 million for 15 players. That's about the maximum if the team wants to remain under the $189 million threshold, which includes $11 million to $12 million for benefits.

New York would gain flexibility if Alex Rodriguez is suspended for most of the season, relieving the team of a large percentage of his $25 million salary.