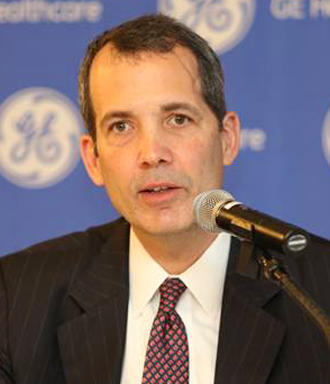 Global medical company GE Healthcare, which pioneered digital mammography, said yesterday it will invest nearly $180 million over the next 10 years to establish its Mammography Global Center of Excellence (COE) in Korea.

At a press conference at the Westin Chosun Hotel in central Seoul yesterday, GE Healthcare CEO Tom Gentile said the company signed an MOU with the Ministry of Trade, Industry and Energy, Gyeonggi and Seongnam City.

“The company will collaborate with the Korean government to establish GE’s Mammography Global Center of Excellence (COE) by exporting innovative mammography developed and manufactured in Korea,” said Gentile.

GE Healthcare introduced digital mammography in 2000, which changed the paradigm of breast cancer screening and diagnosis with its speed and increased accuracy.

Through the MOU, GE Healthcare plans to meet about $1 billion in global demand with mammography technology “Made in Korea.”

The company said it will also identify and nurture competitive local small and midsize businesses, contributing to a creative economy and the development of the medical-device industry in Korea.

GE plans to hire nearly 80 engineers by 2018 and local suppliers for about 90 percent of mammography system parts.

Breast cancer “threatens the quality of lives of women all around the world,” said Gentile. “Korea’s world class medical professionals, institutions and infrastructure, combined with excellent R&D capabilities, make this an exciting partnership. The Korean government showed a strong will for growth of the medical industry and development of Korean companies to enter the global market. We look forward to innovating technologies with speed while maintaining a competitive and reliable supplier base to meet the demands of the global market.”

This MOU is a follow-up to GE Chairman Jeff Immelt’s visit to Korea in October, during which he spoke about GE’s need to leverage Korea’s excellent capabilities.

“We are pleased to begin our close cooperation with the reputable global company GE by signing the MOU. Successful establishment of the Mammography COE will bring the government’s creative economy closer to reality,” said Yoon Sang-jik, minister of trade, industry and energy.

“Through the partnership, we will support Korea’s excellent R&D capabilities and discover and nurture competitive local small and midsize businesses.”

Gyeonggi Province Gov. Kim Moon-soo added, “Forming a partnership with GE is part of our continued efforts to create jobs and stimulate the regional economy, as well as to turn Gyeonggi into a mecca for global high-tech health care technology.”

GE Healthcare Korea already operates an ultrasound manufacturing facility and R&D center in Seongnam, Gyeonggi, and is establishing the GE Global U-Health R&D center in Songdo, Incheon, in cooperation with the Ministry of Knowledge Economy.