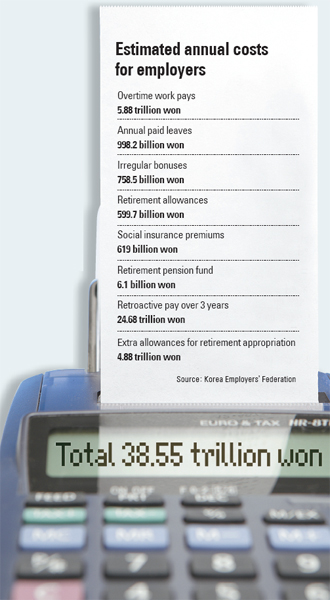 Backlash was swift from the business community following the Supreme Court’s decision yesterday to include bonuses and other regular payments in base salaries, which is expected to cost companies a lot.

Byeon Yang-gyu, an executive director of the Korea Economic Research Institute, said at a press conference held at FKI headquarters yesterday that the Supreme Court’s ruling missed the key point of a base salary, which should be focused on compensation for employees’ work.

“This could be a factor that hinders economic growth as companies will be forced to use cash initially planned for investment for labor costs,” he said.

It’s important for employers to have a clear definition of a worker’s base salary because it is used as a basis to calculate overtime, severance and retirement payments.

If the base salary includes a prorated share of bonuses and extra allowances, the amount companies will pay in overtime and retirement payments will go up.

The KEF forecast that about 38 trillion won ($36 billion) would be incurred as additional costs at major conglomerates if the court’s decision is applied retroactively for the last three years, although the court left room for negotiation between management and labor on retroactive pay.

For companies, the estimated additional cost is a contingent liability they may have to pay right away.

In addition to the 38 trillion won, companies will have to pay 8.86 trillion won more a year from next year. According to Korea Exchange data, given that Korean companies earned 12.79 trillion won in net profit this year, the cost is more than three-fourths of that amount.

The total cost Korean companies will have to pay per year from next year according to the KEF includes 5.88 trillion won in more overtime pay, 998.2 billion won in annual paid leave and 758.5 billion won in irregular bonuses.

“The latest decision will incur an immense cost for companies,” the KEF said.

The Korea Federation of SMEs also released a statement saying the decision would cost small businesses about 14.3 trillion won more for the past three years, and 3.4 trillion won a year from next year.

“The additional cost will lead to less investment and fewer jobs,” the statement said.

The business community blames the Ministry of Employment and Labor for defining the ordinary wage in a confusing way, which caused the controversy in the first place.

The Ministry of Employment and Labor states that additional allowances that are not related to working hours, such as regular bonuses, are not calculated as part of the base salary. This definition was set in 1988.

Since then, a number of unions have filed suits demanding the accounting change including at automakers, shipbuilders and airlines. There are currently about 180 similar suits.

For the past 25 years, the ministry has been aware of the problem in the definition, but it didn’t make any attempts to revise it, despite warnings from analysts and labor unions.

Employers are likely to sue the government for damages.

“There will be no way for companies to bypass the court’s ruling, but after they pay the additional amounts, companies might file suits against the government,” said an executive at a small business.

The court’s decision is expected to impact foreign businesses operating in Korea such as General Motors. Its chairman told President Park Geun-hye that the issue could cost the company a lot at a meeting when Park visited the United States in May.

After the Supreme Court’s decision, the local automobile industry expressed concerns that its labor costs would rise and weaken its competitiveness. Companies like Hyundai Motor and GM Korea didn’t release official statements, saying that yesterday’s decision affects industry in general.

“We need to see the Ministry of Employment and Labor’s revised guidelines and then need to prepare the exact measure, so we have to wait and see,” a spokesman from Hyundai said. “As far as I know, it avoided the worst scenario because some allowances were omitted from basic salaries, although the decision still represents a big burden.”

It was widely known that Hyundai and GM Korea prepared three or four possible scenarios ahead of the court’s decision.

Although the exact costs for each company are unknown, analysts have previously estimated that the combined extra costs for Hyundai, Kia and Hyundai Mobis, all affiliate of Hyundai Motor Group, could reach at least 4 trillion won to 5 trillion won in the first year, while the operating profit ratio could be cut by 1 percentage point.

As for GM Korea, the Korean unit of the U.S. automaker General Motors, analysts have worried that GM would pull out of Korea entirely, despite an announced plan to invest 8 trillion won for the next five years. It currently also is awaiting a court decision in its union’s case on the basic salary issue.

According to a recent report by the Korea Automobile Manufacturers Association (KAMA), if regular bonuses are reflected in basic salaries, it could lead the chopping of 23,436 jobs, which is 9.1 percent of the 259,136 workers in the auto industry as of August.