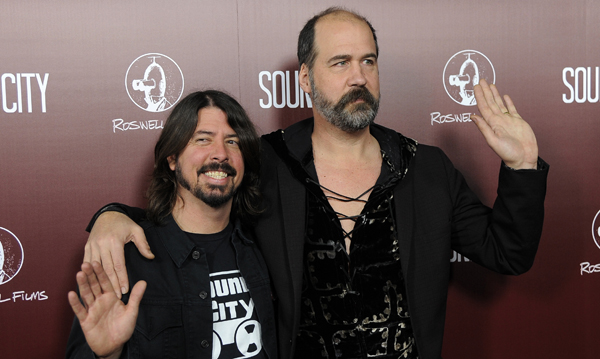 In this Jan. 31, 2013 file photo, Dave Grohl, left, poses with Nirvana bandmate Krist Novoselic at the premiere of the documentary film “Sound City,” in Los Angeles. Nirvana will be inducted into the 2014 Rock and Roll Hall of Fame on April 10 at the Barclays Center in New York. [AP/NEWSIS]

NEW YORK - Nirvana, Kiss and Peter Gabriel will be inducted into the Rock and Roll Hall of Fame next year.

The Rock Hall announced Tuesday that Hall and Oates, Linda Ronstadt and Cat Stevens will also be inducted April 10 at the Barclays Center in Brooklyn.

Artists are eligible for induction 25 years after their first release. Nirvana received a nomination in its first year of eligibility and next year the band will celebrate the 25th anniversary of its debut, “Bleach.” The induction comes 20 years after frontman Kurt Cobain committed suicide at age 27.

“For once .?.?. I’m speechless. From the basements, to the dingy clubs, to the broken down vans, to .?.?. the Rock and Roll Hall of Fame,” former Nirvana drummer Dave Grohl, now the frontman for Foo Fighters, said in a statement Tuesday. “I’d like to thank the committee not only for this induction, but also for recognizing Nirvana for what we were: pure rock and roll.”

“Thank you most of all to Kurt Cobain,” bassist Krist Novoselic said in the statement issued on behalf of Nirvana. “And to everyone who’s kept rock music going strong for 60 years and counting.”

This year also marked first-time nominations for Hall and Oates, Gabriel and Ronstadt. Kiss and Stevens, who have been nominated in the past, made the cut after being absent from the list for several years.

“We were four guys from New York City who brought Barnum & Bailey into rock and roll,” he told The Associated Press. Criss last toured with the band in 2003 and hopes to be asked to perform with the other three founding members at the induction ceremony at New York’s Barclays Center. The Hall of Fame is in Cleveland, but the location of the induction ceremony varies from year to year.

“We wanted the makeup and the costumes and the bombs,” Criss said. “Our idea was to give people a hell of a lot more for their money. We changed music by insisting you can’t go up there and just sing anymore. That’s going to stand forever.”

“The spirit of rock and roll for me has always meant following the paths I choose, regardless of what my critics or my peers think,” he said. “For 40 years, Kiss has built an army that apologizes to no one, and I’m honored to be inducted into the Rock and Roll Hall of Fame knowing we have remained true to ourselves and our fans.”

Also at the ceremony, The Rolling Stones’ manager Andrew Loog Oldham and the late Beatles manager Brian Epstein, will receive Ahmet Ertegun awards, a nonperforming honor. And Bruce Springsteen’s E Street Band will get the award for musical excellence.

NWA, one of the 16 nominees announced in October, did not make the cut. The iconic rap group includes Dr. Dre, who has launched successful solo albums and is the producer behind Eminem, 50 Cent and Kendrick Lamar.

The 29th annual Rock and Roll Hall of Fame Induction Ceremony will be open to the public. Tickets go on sale next month.

The event will air on HBO in May.