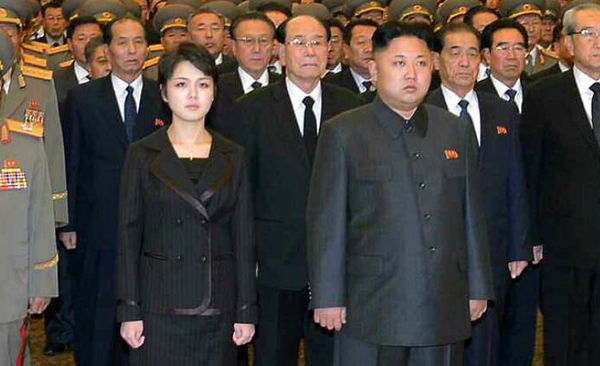 Ri Sol-ju, left, is pictured Tuesday without a Kim Il Sung badge as she attends a function marking the second anniversary of Kim Jong-il’s death, with her husband Kim Jong-un, at the Kumsusan Palace of the Sun in Pyongyang. [Rodong Sinmun]

From supreme leader Kim Jong-un down to the poorest farmer, what the approximately 24.7 million North Korean citizens have in common is the required duty to wear a badge bearing the portraits of Kim Il Sung or Kim Jong-il.

These lapel pins, featuring the images of the state’s late rulers, are worn on the left side of the chest - above the heart - an evident symbol of respect.

So on Tuesday, when North Korea marked the second anniversary of the death of Kim Jong-il, military officials and Workers’ Party members present naturally wore the compulsory accessory. And despite the crude rumors that have circulated about Ri Sol-ju, the wife of Kim Jong-un, the first lady nevertheless stood by her husband’s side at the commemoration - her first public appearance in two months.

But, oddly enough, she was missing the Kim Il Sung badge, despite the fact that all the uniforms of the statesmen around her were punctuated with them.

Curiously, another person who recently appeared without the Kim Il Sung badge was none other than Jang Song-thaek, Kim Jong-un’s powerful uncle, who was convicted of treason and other anti-state activities last week and promptly executed.

Shortly before his death he was photographed handcuffed and stooped over, sans the badge.

However, officials believe the situation is different for Ri, with the absence of the pin not necessarily an ominous sign. In fact, ever since she first appeared in the public eye in July 2012, she is rarely seen wearing it.

Ri briefly disappeared following rumors in August that she was involved in the reported executions of the members of the regime’s Unhasu Orchestra, who were charged with sexual misconduct and praising capitalism. A number of rumors emerged about the reasons behind the first lady’s absence, who is herself a former member of the musical ensemble.

Yet Ri could be seen acting the role of first lady of the regime on Tuesday, arms linked with Kim Jong-un as they walked up the stairs to the Kumsusan Palace of the Sun, where the remains of his father Kim Jong-il are enshrined. Her presence at the ceremony swept away theories that she was being held captive or destined for a darker fate.

Officials from South Korea’s Ministry of Unification and others pointed out that she has not worn the patriotic pin in more than a year. “It seems young Ri Sol-ju is paying attention to fashion to pursue her individuality,” a government official here said, adding that not wearing her badge “may be because of her carefree personality.”

Ri attracted attention in her first appearance with the young leader on July 6, 2012, where she was pictured with the badge.

Though a few weeks later when the two attended the July 25 opening of the Rungna People’s Pleasure Ground in Pyongyang, she was shown wearing an emerald-green shirt and a short black skirt. Instead of the pin, she wore a flower-shaped brooch.

At subsequent official events, she has appeared in a number of stylish outfits, donning high heels and sometimes even carrying designer bags. For the late Kim Jong-il’s birthday celebrations last February, Ri wore the badge, though she has not been seen with it since.