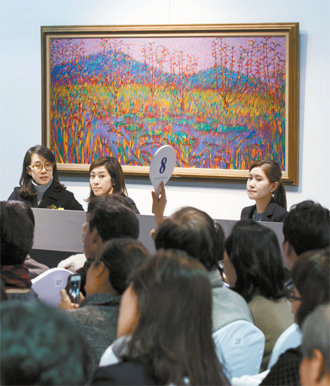 A bidder raises a paddle for Lee Dai-won’s “Farm,” pictured here, a painting that once hung on the wall of former strongman Chun Doo Hwan’s house. The painting sold for 660 million won (627,000 dollars). [NEWS1]

The crowd at Seoul Auction’s headquarters in Pyeongchang-dong, central Seoul, applauded as the auctioneer’s hammer fell for “Farm,” a large, colorful oil painting that had long hung on the wall of the house of Chun Doo Hwan, Korea’s former president and strongman. After several minutes of bidding, it sold for 660 million won ($627,000) to an anonymous phone bidder, beating the presale estimate of 300 million to 600 million won.

The 1987 painting by Lee Dai-won (1921-2005), a renowned Korean modernist artist, was the highlight of the first round of sales for the so-called Chun Collection. All 121 pieces that were on the block sold yesterday afternoon, a range of paintings, lithographs and porcelains that brought in 2.77 billion won in total, much higher than the estimate of 1.75 billion won.

“We can say a kind of premium is included in the high price for ‘Farm,’ as many people have seen the painting hanging on the wall of Chun’s house on TV,” said Jun Lee, chief executive officer of Seoul Auction, the auction house in charge of the sales.

“But not only Lee, but some artists who led the 2007 boom of the Korean art market showed good results. So I think it is a good sign for the local art market.”

A week ago, K Auction saw the 80 works it offered from the Chun Collection sell out in the company’s exhibition hall in Sinsa-dong, southern Seoul. That sale raised 2.57 billion won, also higher than its estimate of 1.7 billion won. The most expensive item that day was “24-VIII-65 South East,” an abstract oil painting by Kim Whanki, one of the titans of Korean modern art, selling for 550 million won.

Earlier this year, prosecutors confiscated the private art collection from the former president and his family to pay for the outstanding 167.2 billion won in penalties he received in a 1996 guilty sentence on a range of misdeeds while in office.

The prosecutors then commissioned the nation’s two biggest auction houses to sell some 600 works of art. The first round of sales included 201 pieces.

“It it too early to say that the successful sale of the Chun Collection is a sign of recovery in the Korean art market, which has suffered a deep slump since the 2008 global financial crisis,” said So Jin-su, director of the Art Market Research Institute. “It is because the ranges of estimate for each work were set very wide, with the starting prices set lower than in ordinary auctions. Whereas the goal of ordinary auctions is to sell artworks at good prices, the goal of the Chun Collection sale is to sell as many as possible for the nation to receive the unpaid fines from Chun.

“Still, it can have some positive effects on the Korean art market, as more people have come to have interest in art auctions.”

In yesterday’s sale by Seoul Auction, 16 ink paintings by nine important late-Joseon painters, which had originally been combined into a book but were offered separately, attracted great attention. Most of those paintings sold for higher than their estimated ranges.

However, a group of early works by important Korean contemporary artists, such as Yuk Geun-byeong and photographer Koo Bohn-chang, which Chun’s first son Jae-kook included in his publishing company Sigongsa’s “Art Vivant” series, sold at the lower end of their estimated prices.

“Art Vivant” was a series of 55 art books published between 1993-6 to introduce Korean contemporary artists to the global art scene.

The unexpected stars of the auction were a group of porcelain figurines by Lladro, a Spanish company. The 36 figurines sold for 132.2 million won in a fierce competition. A piece titled “Love,” depicting Cupid, sold for three times higher than the estimate.

The proceeds from the first round of sales at the two auction houses totalled 5.34 billion won, higher than the initial estimate of 3.7 billion won. Still, the final yield from the sales could be lower than the prosecutors’ estimates. In October, a prosecution team said the art collection would be worth 10 billion won. K Auction said early this month that it would put many of the most valuable items in the first round to attract public attention. Seoul Auction seems to have taken a similar strategy. It is therefore uncertain whether sales in future rounds will be so successful.

The art sales are just one part of a wide range of assets confiscated by prosecutors, including real estate and stocks. Originally fined 220 billion won in 1996, Chun had only repaid 53.3 billion.

But the Chun family finally relented in September and agreed to pay off an outstanding fine, offering up a list of assets the state could seize.

The move came after a special investigation team was launched for the purpose of collecting assets from the former president in May and the passing of the so-called Chun Doo Hwan Act in June, which allowed the state to confiscate assets not only from Chun but also family members and associates who acquired wealth from him.

In 1996, Chun was convicted of accepting bribes and running slush funds during his seven-year presidency. He was sentenced to life in prison and fined.