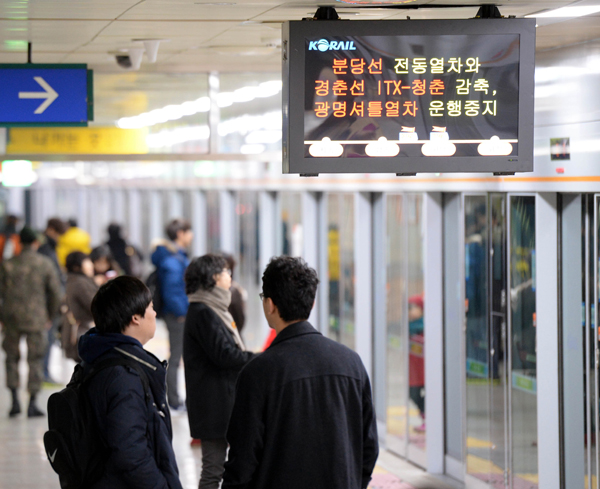 Amid the longest strike by the labor union of the Korea Railroad Corporation, or Korail, an electronic display at Hwajeong Station on Seoul subway line No. 3 shows yesterday the number of Korail-run subway trains that were to be reduced. [NEWSIS]

A major disruption of the Seoul subway system was averted when two subway unions canceled their planned strike.

But national train services and some subways are still affected by the longest-ever strike by the state-run railway operator, which shows no sign of resolution.

The subway operator agreed to gradually increase the retirement age from 58 to 60 by 2016.

A trickier issue was how to calculate the lump-sum payments given to retirees.

In the past, the amount of the severance payment increased proportionately after a certain numbers of years of continuous service.

But a law introduced in 2002 requires all public-sector companies to adopt a fixed amount of payments per year of service.

That led to a reduction in lump-sum payments for retirees and prevented some public companies from fully embracing the plan.

In the agreement reached Tuesday, Seoul Metro will transition to the new system starting next year but will also pay workers an additional payment that compensates for 50 percent of the benefits they would have lost.

The Seoul Metro Subway Labor Union said from the start that it was only interested in discussing the retirement age and benefits, not the Korail strike.

In contrast, the Seoul Subway Labor Union, the largest union for the Seoul Metro, said it was planning to strike out of sympathy for the Korail union.

Operations of both national train services and some subway lines were affected after the Korail strike went into its 10th day yesterday.

Korail and Seoul Metro jointly oversee the operation of subway lines Nos. 1, 3 and 4. The number of trains on subway line No. 3 was reduced by around 20 percent on Monday.

On Monday, a court issued arrest warrants for 10 union leaders, and prosecutors raided the offices of the union on Tuesday, saying the strike was illegal.

Workers walked off to protest the company’s decision to introduce a new operator to run a new bullet train on a KTX line. The union maintains that the spin-off line is a stealthy way of privatizing Korail, an allegation that the company and the government deny.

“Korail should serve people, not the interests of workers or a certain entity,” he said. “Union members should go back to work and regain the public’s trust.”

Freight services are down to 36 percent of their normal volume.

Bullet train services have been cut by 12 percent.