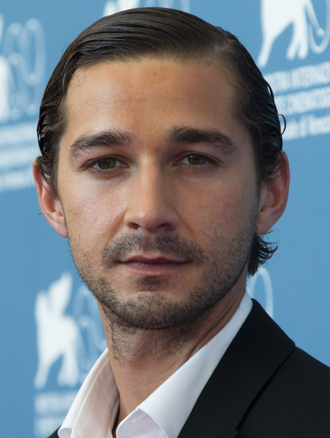 Actor Shia LaBeouf poses at the 69th edition of the Venice Film Festival in 2012. He recently admitted to borrowing another artist’s work without credit.[AP/NEWSIS]

LOS ANGELES - There may be legal ramifications for Shia LaBeouf after he acknowledged borrowing from another artist’s work without giving proper credit.

LaBeouf debuted his short film, “Howard Cantour.com,” online on Monday starring Jim Gaffigan. It examines the life of an anguished online film critic. That was also the storyline of a 2007 graphic novella by artist Daniel Clowes titled “Justin M. Damiano.”

Clowes declined to comment directly, but according to his publisher, Fantographics’ Eric Reynolds, Clowes “is exploring his legal options.”

Reynolds said Wednesday he was “baffled” by the news of LaBeouf’s project, which he and Clowes got wind of on Monday.

“LaBeouf changed the name of the main character, but he used the comic as a direct script and storyboard,” Reynolds said. “Clowes has a real melodramatic voice that is very idiosyncratic and LaBeouf just used the dialogue word for word. There is no ambiguity. There is no way that anybody wrote this but Dan Clowes. It just defies any kind of logic or good sense. This was so blatant and inexcusable that it was as baffling as it was appalling.”

LaBeouf’s short began to circulate in 2012 at festivals like the Cannes Film Festival, but was just posted online officially on Monday. Soon afterward, it was taken down, and LaBeouf took to Twitter to apologize for lifting ideas from Clowes’ work and passing them off as his own.

Under the handle @thecampaignbook, LaBeouf said, “Copying isn’t particularly creative work. Being inspired by someone else’s idea to produce something new and different IS creative work.”

“In my excitement and naivete as an amateur filmmaker, I got lost in the creative process and neglected to follow proper accreditation,” LaBeouf added on Twitter. “I’m embarrassed that I failed to credit @danielclowes for his original graphic novella Justin M. Damiano, which served as my inspiration. I was truly moved by his piece of work & I knew that it would make a poignant & relevant short. I apologize to all who assumed I wrote it. I deeply regret the manner in which these events have unfolded.”

Reynolds added that LaBeouf has not made any attempts to reach out to Clowes directly to apologize. “As far as I know the only comments he has given were those late-night Twitter comments a few nights ago,” said Reynolds. AP