Anniversary has scant joy for Park

Anniversary has scant joy for Park 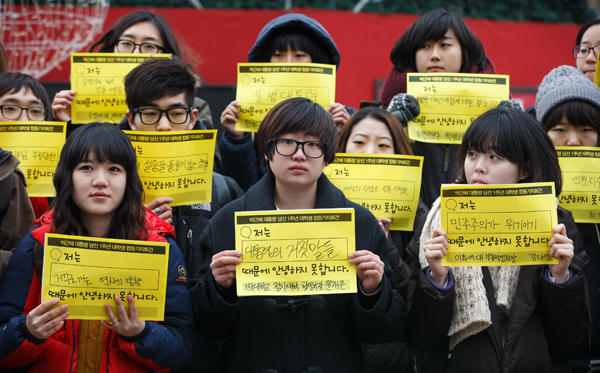 Yesterday was the anniversary of President Park Geun-hye’s presidential election, but her administration has been bogged down in endless partisan feuding over the legitimacy of her victory after allegations of government tampering in the campaign.

And yesterday was no exception.

The opposition Democratic Party yesterday enumerated what it dubbed “state-affairs disorders” that have surfaced since last December’s election. They included the National Intelligence Service’s alleged smear campaign in favor of Park during the presidential campaign, her “withdrawal” of a welfare campaign pledge, “nowhere-to-be-found economic democratization” (another Park campaign slogan) and a surreptitious government campaign to privatize Korea’s state-run railroads.

DP spokesman Park Yong-jin went so far as to say that Park Geun-hye’s administration has been “flipping all its promises ever since she was elected.” Another grave charge against the president, according to party floor leader Jun Byung-hun, is a willful “lack of communication.”

The president has been criticized for refusing to discuss or accept opinions from not only the opposition party but also the public and her own advisors, an accusation of arrogance that has dogged her since she was inaugurated 300 days ago.

“The Park administration has been busy covering up illegalities in the presidential campaign and its wrongdoings over the past year, and the public’s assessment is that it’s a ‘no-communication administration’ that has shattered democracy, campaign pledges and ignored the public’s everyday struggles,” said Jun.

The Blue House responded with surprising hurt about the failure-to-communicate charge.

“I feel most upset about the criticism that Park’s worst flaw is her lack of communication,” said Lee Jung-hyun, senior presidential secretary for public affairs, in a briefing on Wednesday.

“If you define doing something different and sticking to principle as ‘no communication,’ that is something to be proud of.”

Yesterday morning the president met with 77 heads of small and midsize enterprises who joined her on her overseas trips over the past 10 months. The event was meant to “expand participation of smaller companies in global business chances that will be spurred by the president’s sales diplomacy,” according to the presidential office.

She then invited some 600 party members, including some from local branches, to the Blue House for lunch. She had dinner with senior Saenuri Party lawmakers, including its chairman Hwang Woo-yea and floor leader Choi Kyung-hwan. She dined with her own party members for the first time since April.

Predecessor Lee Myung-bak, by contrast, invited Blue House workers to lunch five years ago and held a small ceremony to celebrate the election anniversary, as well as his birthday and wedding anniversary, which happened to all fall on the same day.

The Blue House specifically noted that the events involving Saenuri Party members yesterday were not “to celebrate” but were year-end parties.

“The lunch has no particular ties with the presidential election victory because it is meant to cheer up those officials who have been working for her quietly,” said a high-ranking Blue House official.

The ruling party held its own anniversary event at party headquarters in the morning.

Meanwhile, an analysis of 66 speeches the president delivered in the past 10 months offered a glimpse into her priorities.

The top five words or phrases Park used most frequently were creativity, cooperation, creative economy, the Korean Peninsula, and science and technology.

The analysis was conducted with the help of the Intelligence Web Business Laboratory run by Yonsei University Professor Kim Woo-ju.

The analysis also showed that Park rarely mentioned political issues. She used the term National Assembly 31 times, “ruling party” four times and “opposition party” only once during the 10 months.

“The president’s rhetoric is largely focused on offering hope and vision to the nation,” said Hur Gyeong-ho, a professor at Kyung Hee University.