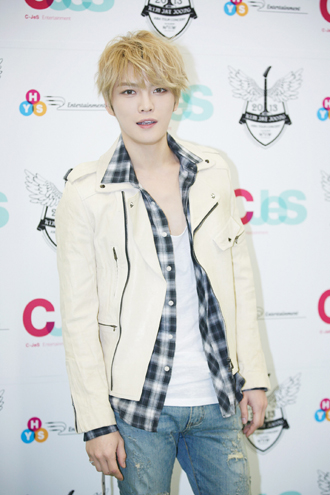 Although it rained and the temperature fell that day, many fans showed up to see their favorite singer perform.

Kim talked to his fans in Japanese throughout the concert, which triggered an excited response.

During the three-hour show, the singer performed about 20 songs, including “Rotten Love,” “Kiss B,” “Now is Good,” and “Don’t Walk Away” from his first full-length album and other mini-albums. He also performed some popular Japanese songs, including “Glamorous Sky” by Mika Nakashima.

“Thank you for congratulating me on the 10th year since the debut,” he said toward the end of the concert.

“I have been so happy as you have been always with me.”

He also mentioned that he will soon be entering the military and that he will have to stay away from the entertainment scene and his fans.

“Although I won’t be able to do anything for about a year and a half, I’m not scared as I will always be with you,” he said.