Koreans cash in on exchange rate

Koreans cash in on exchange rate 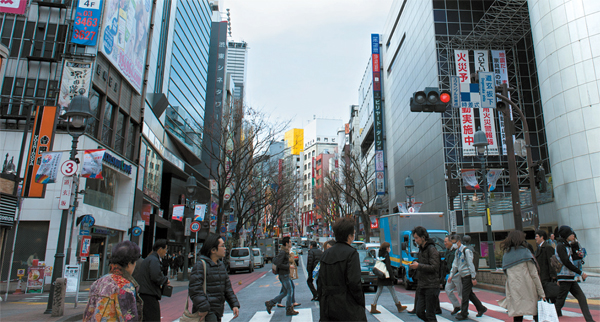 Tokyo’s major shopping areas have been bustling with Korean visitors taking advantage of the won’s strength against the yen. [BLOOMBERG]

Less than three months after a visit to Tokyo, Chang Sun-jan is already planning her next Japanese trip to take advantage of the won’s surge to a five-year high against the yen.

“Next year, I’ll go to a hot spring in Hakone if the yen stays low,” Chang said from her home in Busan. On her last trip, the 56-year-old loaded up on gifts including Shiseido cosmetics and Sanrio’s Hello Kitty toys, “because the exchange rate was so good.”

The won has risen 48 percent versus the yen since the start of 2012, the biggest advance among 16 major currencies tracked by Bloomberg, as the number of Korean visitors to Japan jumped this year by 23 percent. Strategists predict it will gain more than 4 percent over the next year to 9.671 yen, or 9 cents.

The currencies are being driven apart by the diverging prospects of Asia’s second- and fourth-biggest economies. While Korea is on course to achieve a record $63 billion current-account surplus this year, Japan recorded its worst-ever shortfall in September and has embarked on an unprecedented stimulus program that’s debasing its currency.

“We are very bullish on Korea,” said Adrian Mowat, the Hong Kong-based chief Asia and emerging-market strategist at JPMorgan Chase, in an interview with Bloomberg Television. “I want to be in countries that can benefit from strong U.S. growth, yet have current-account surpluses and arguably an undervalued currency.”

Chang joined 2.27 million Koreans who visited Japan in the first 11 months of 2013, the biggest number from a single nation and accounting for 24 percent of arrivals, according to the Japan National Tourist Organization.

Currency moves that are luring them across the East Sea are being monitored by Korea’s authorities, Finance Minister Hyun Oh-seok has said. Yonhap Infomax quoted Vice Finance Minister Choo Kyung Ho as saying yesterday that the government will take preemptive steps if needed as the yen’s drop has been accelerating, while the won stays relatively stable. Officials have hinted they may intervene in markets to weaken the won and curb the “herd behavior” of speculators.

“With Korea still the closest competitor to Japan in terms of the structure of its export basket, concerns about a loss in competitiveness will likely drive a defensive stance by Korean authorities toward the won,” said Sameer Goel, head of Asian foreign exchange and rates research in Singapore at Deutsche Bank AG, the world’s biggest currency trader. “Nonetheless, the won should be able to outperform the yen.”

Goel predicts the won will climb to 9.75 per yen in the first half of next year, compared with the 10.096 median estimate of more than 20 analysts surveyed.

Gross domestic product in Korea increased 1.1 percent in the third quarter from the previous three months, while Japanese growth slowed to a seasonally adjusted 0.3 percent. Japan had a current-account deficit of 59.3 billion yen in October following a record 125.2 billion-yen shortfall in September, after seasonal adjustment.

Global investors attracted by Korea’s trade balance are pouring into the country’s assets and propping up the won. Foreigners bought 13 trillion won ($12.4 billion) more Korean shares than they sold on Seoul’s main bourse in the second half of 2013, the most in three years, according to exchange data.

Next year, some of the capital inflows may come from Japan, according to Robert Minikin, a senior strategist in Hong Kong at Standard Chartered, which gets about three quarters of its earnings from Asia.

“It seems reasonable that Japanese pension funds will look to diversify into overseas assets,” said Minikin, who sees the won appreciating to 9.27 yen by the end of 2014. “Korea, as a relatively liquid emerging bond market with strong economic fundamentals, will be a natural beneficiary.”

Overseas funds own just 18 percent of Korea’s bonds, with central banks holding 41 percent, according to a July report from JPMorgan. This may protect the country from outflows as the U.S. tapers its unprecedented monetary stimulus program.

The Washington-based Federal Reserve said at the end of its policy meeting on Tuesday that it’s cutting monthly bond purchases to $75 billion from $85 billion as the U.S. economy recovers.

Speculation that the Bank of Japan will extend its bond purchases contributed to the yen’s 16 percent drop versus the dollar this year. That’s the most since Japan’s currency weakened 19 percent in 1979.

Of 37 economists surveyed last month, 19 expected the BOJ to extend monetary easing from April to June next year. Since this April, Japan has been buying more than 7 trillion yen of government bonds a month in an attempt to boost growth and end 15 years of crippling deflation.

“The risk is that you get more easing from the BOJ,” said Joseph Capurso, a strategist at Commonwealth Bank of Australia in Sydney. “The Korean won can strengthen further against the yen.” Bloomberg