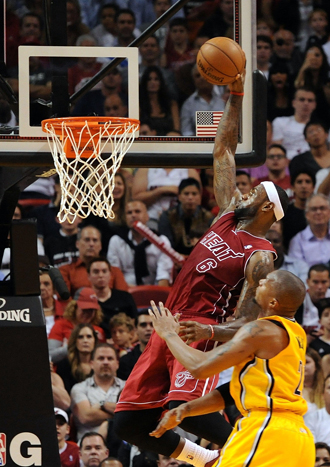 Dwyane Wade scored 32 points, Ray Allen hit a go-ahead 3-pointer with just under a minute left and the Miami Heat erased a 15-point deficit in the second half to beat the Indiana Pacers, 97-94, on Wednesday night. LeBron James scored 24 on a bad left ankle for the Heat, who closed within a game of the Eastern Conference-leading Pacers. Chris Bosh added 15 points for Miami, including a 3 that tied it late in the fourth.

James set up Allen for the three that put Miami in front for good with 59.5 seconds left, capping a 10-0 run.

Paul George scored 25 points but missed a 3-pointer that would have tied it with 4 seconds left. David West had 23 and Lance Stephenson added 13 for the Pacers, who have dropped two straight.

Down by one, the Pacers saw their best chance go awry when George Hill turned the ball over on a bad pass with 14 seconds left. Allen made two free throws with 10.3 seconds remaining to put Miami up by three, and that capped a big comeback win for the two-time defending NBA champions.

Pacers center Roy Hibbert got his fourth foul early in the third, and Indiana coach Frank Vogel opted to leave him in the game. The gamble appeared to backfire 46 seconds later when Hibbert picked up his fifth with 8:34 remaining in the quarter.

George made three free throws after getting hit beyond the arc by Mario Chalmers to put Indiana up 66-51 midway through the third, and the Pacers’ lead was still 14 with 4:17 left in the period.

But Norris Cole’s 3-pointer, Miami’s first in 10 tries to that point, started what became a 13-4 Heat run and made it a 76-71 game entering the fourth. Nonetheless, Indiana remained in control, and when West connected with 3:21 left, the Pacers were up 92-85 and seemed well on their way to closing things out.

Then, the Heat went on a run. They scored the next 10 points - Bosh’s 3-pointer, his first in 15 attempts, tied it at 92. And after George missed in the lane at the other end, James brought the ball the other way and found Allen for a 3-pointer that put the Heat ahead for the first time since the score was 14-13. They didn’t trail again.

Even though the teams won’t see each other again until March, and with the playoffs still some 50 games away, there was clearly a little more meaning to this one. After all, those often-rugged playoff battles that went Miami’s way the last two seasons aren’t going to be forgotten anytime soon.

Stephenson had nine points and five rebounds in the first quarter as Indiana built a 26-22 lead, and a 10-2 push over the first 2:14 of the second extended the Pacers’ cushion to 12. Miami eventually got within three, but another run put Indiana up by 13 late in the half, and the Pacers went into the break with a 52-41 advantage. AP