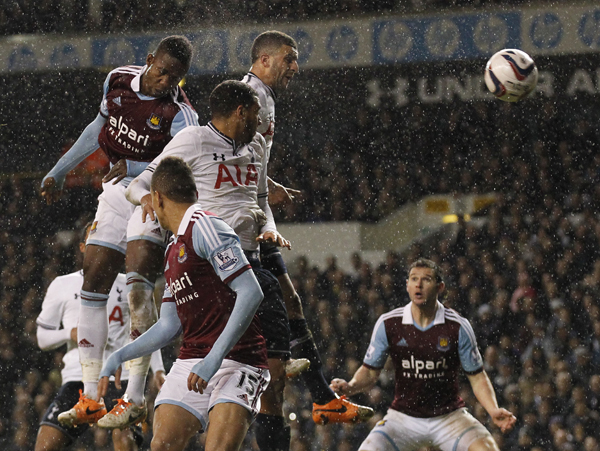 Shock therapy failed to produce the desired result at Tottenham as the Spurs conceded two goals in the last 10 minutes to go out of the League Cup in the quarterfinals after a 2-1 home defeat to West Ham on Wednesday.

Manchester United also advanced with a 2-0 win at Stoke courtesy of goals from Ashley Young and Patrice Evra. The Red Devils face Sunderland next, with a potential final against bitter rival Manchester City after the Blues were drawn against West Ham in the other semifinal.

The match at Stoke was interrupted in the 29th minute because of hail, with a delay of more than 10 minutes before Young scored a spectacular goal from the edge of the box in the 62nd minute after a 1-2 with Javier Hernandez. Evra then sealed the Red Devils’ win by curling home a right-footed strike in the 78th.

In the first match since Andre Villas-Boas’ dismissal on Monday - after a 5-0 home loss to Liverpool - Tottenham interim manager Tim Sherwood made six changes as Emmanuel Adebayor enjoyed his first start.

Adebayor, who had played only 45 minutes this season after being ignored by Villas-Boas, put the Spurs in front with a spectacular volley in the 68th, but West Ham got back into the match when Modibo Maiga flicked the ball to Matt Taylor, who found Matt Jarvis before the winger scored with a clean finish in the 80th.

Maiga then jumped higher than the Tottenham defenders five minutes from time and headed home past Hugo Lloris to silence the Spurs fans with his first goal of the season.

Tottenham got off to a strong start, creating a first chance almost immediately as Aaron Lennon surged down the right flank before crossing the ball for Defoe, whose shot was just wide.

Lennon went close after the interval after West Ham’s defense failed to clear Rose’s cross, but his deflected effort was inches wide.

It was then Sigurdsson’s turn to miss a chance from close range before West Ham captain James Collins almost lobbed Lloris from 70 meters (76.6 yards). AP