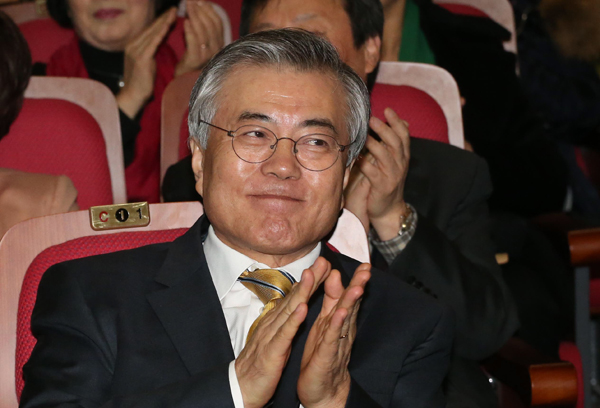 A first impression is incredibly influential. You can’t grasp much information about a person just by looking at them, and a first impression often dominates overall opinion of that person for a long time. That’s why I finally felt my impression of Democratic Party’s Moon Jae-in change when I learned that he said at a book publishing ceremony on Dec. 15: “Politics has become my destiny, which I cannot avoid any longer.”

It was in April 2002 when I first met Moon, then a lawyer. I was covering the background of Roh Moo-hyun, who was a promising presidential candidate for the Democratic Party. The lawyer I met at the law firm “Busan” was simple and honest. After listening to his stories about how he and Roh worked as human rights lawyers in the 1980s, I ended the interview by asking, “If Roh becomes president, would you join the Blue House staff?”

I meant it as a compliment, but his answer was firm: “I will never be in politics. There’s no way.”

I could tell he wholeheartedly meant it.

Since the interview, I’ve never met with Moon in person. But his assertion that he would not pursue politics left a deep impression on me. When he was appointed as the Blue House secretary for civil affairs and then chief of staff during the Roh administration, it didn’t occur to me that he had become a politician. Even when he ran for president, seeing him as a politician was awkward to me. It may have all been illusions based on my first impression.

But time can change many things. His latest remarks suggest he is determined to become a professional politician. It is customary for a defeated candidate to stay away from politics for a year or two, but Moon has almost made it clear that he will run for president in 2017. It is as meaningless to forecast his possibility of winning the 2017 presidential election as it is predicting the weather. It is also unclear if he will win the Democrat Party primary. But he deserves credit for building political insight through the last presidential election.

Moon’s recently published memoir on his experience in the last presidential election says his defeat was unfair. If that was the only thing he wanted to claim, there could be no progress. But he presented objective analysis on the faults of the election entities. He mentioned the failure to win votes of the older generation, his passive response on security issues and a lack of an agenda for growth as the tactical causes of his defeat. If he doesn’t repeat those mistakes again, the possibility of a victory for him will increase for sure. So it’s quite regrettable that he personally got involved in the controversy of not accepting the last presidential election outcome. In 2017, it is not President Park Geun-hye he will be competing against.

The author is a deputy political and international news editor of the JoongAng Ilbo.