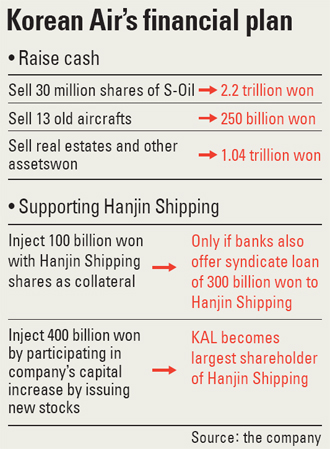 The company said it held a board meeting yesterday and approved a restructuring plan to raise 3.5 trillion won ($3.3 billion) by selling assets.

The air carrier’s debt-to-equity ratio has been rising steadily in recent years and is now more than 800 percent. The ratio previously was about 400 percent, but it surged by 220 percent after new accounting standards were adopted, then was made worse by recent aircraft purchases.

The S-Oil stock provides KAL with about 100 billion won annually. The company said it is in discussions about the sale with Saudi Aramco, S-Oil’s largest stockholder.

In addition, KAL said it will sell real estate and other assets to secure 1.04 trillion won. The airline will also raise 250 billion won by selling 13 old fuel-hungry aircraft like the B747-400 and B777-200.

The company said these plans will lower its debt-to-equity ratio to 400 percent by 2015.

“Sales of S-Oil stock should be completed by the first quarter of next year, while the sales of aircraft will be conducted in 2014 and 2015,” said Lee Sang-kyun, KAL’s chief finance officer, at the Korea Exchange headquarters in Yeouido, western Seoul.

However, Lee said the financial restructuring would not slow the company’s investment in new aircraft and real estate. KAL currently has 146 aircraft and gets about 10 new planes every year using 10-year loans.

Some of the cash raised will be used to help Hanjin Shipping, which needs to pay nearly 100 billion won of debt from commercial paper coming due this month and 390 billion in corporate bonds due next year.

However, the company said this will only happen when creditor banks give 300 billion won in three-year syndicate loans to Hanjin Shipping.

KAL also will enter Hanjin Shipping’s capital increase by issuing new stock next year to boost the company’s effort to resolve its liquidity crisis. The supported amount will be around 400 billion won.

KAL CFO Lee said after participating the capital increase, the air carrier will be the largest shareholder of Hanjin Shipping.