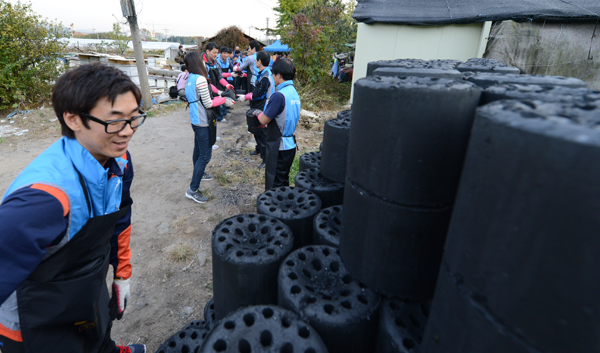 Through Onnuri Love Project, Kogas aims to improve “energy welfare” nationwide. Since 2010, Kogas has invested more than 2 billion won ($1.9 million) every year into its “thermal efficiency enhancement project,” through which it renovates heating systems in low-income households and social welfare centers.

By heating floors, insulating walls and replacing windows, the project enhances energy sufficiency for the underprivileged. The project is coordinated in cooperation with other companies, including the Korea Gas Safety Corporation, the Korea National Council of Social Welfare and Kyung Dong Navien.

Kogas also offers gas utility discounts to low-income households. A total of 31.7 billion won has been subsidized by the company so far, through a 15 percent discount for basic living subsidy recipients - nearly 500,000 households - and a 5 percent discount for 300,000 of those in the next income bracket. Kogas also supported 18,000 social welfare centers with 3.2 billion won worth of gas utility discounts.

Social contribution is also promoted among Kogas employees. The Volunteer 5UP Campaign encourages employees to improve their corporate social responsibility mileage by five percent yearly. CSR mileage can be accumulated whenever employees participate in a variety of events such as employee involvement programs, making donations, monthly volunteer work and so on.

“The total amount of money spent last year by Kogas on CSR, including social contributions, amounted to 48 billion won,” said a Kogas official. The company’s ratio to pretax profit is 9.3 percent, which is substantially higher than 3.2 percent, the average by Federation of Korean Industries, or 2.73 percent, the Japanese average, of 2011.