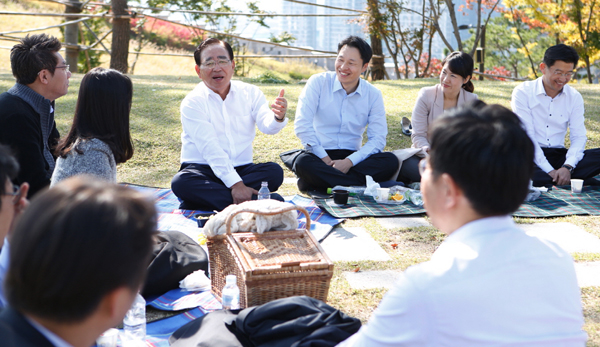 Chairman Han Dong-woo of Shinhan Financial Group joins the employees for a picnic at Namsan to promote communication within the organization. Provided by the company

How often does an employee get to have an informal lunch with their company chairman? It happens every now and then at Shinhan Financial Group, to promote communication between management and employees.

In October, Chairman Han Dong-woo climbed Namsan for a picnic with his employees. Shinhan had invited its holding company workers to sign up for one of several fall picnics. Employees enjoyed spending time in the autumn breeze, a refreshing break from planning next year’s business strategies and reviewing yearly management performances, according to a Shinhan official.

“I know for a fact that organizations with little communication between divisions and ranks fail to achieve sustainable growth in the long run,” said the chairman, who attended the picnic after returning from the annual International Monetary Fund meeting in Washington.

“The power of communication is one of the most important elements of a strong corporate culture.”

Han’s first lunch with Shinhan employees dates back to May at a restaurant in Itaewon-dong, central Seoul. As many as 610 employees below branch manager rank applied to attend the event, and 35 were invited to the first lunch after fierce competition. Those who wished to join had to submit details such as what they wanted to discuss with the chairman, their curiosities about him, and the reasons why they deserved to be invited.

Lunchtime with the chairman was held five times, during May and September. Employees were categorized into different groups, like working moms, single people and new recruits. Han then gave appropriate advice tailored to the employees’ situations, a Shinhan official explained.

Han specifically ordered that no executive other than himself joined the lunches in order to let employees communicate and interact freely without pressure.

This open corporate culture is in line with the “compassionate finance” business motto set forth by Han when he took office in 2011. By actively promoting various strategies to fulfill corporate social responsibility, Shinhan Financial Group has added a human face to finance.

Han has also vowed to hold more frequent lunch dates with employees, stressing that open communication within the group is a fundamental to achieving compassionate finance.