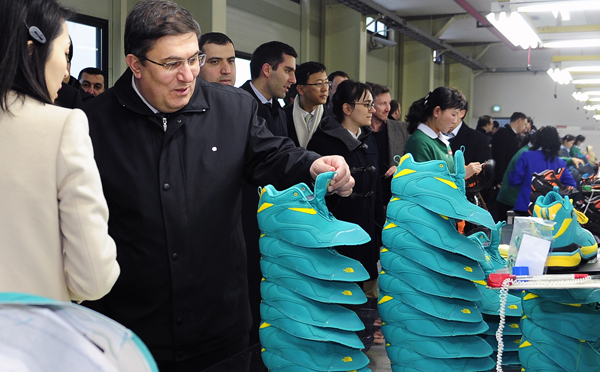 A delegation of foreign officials from international financial organizations visited the Kaesong Industrial Complex on the invitation of South Korea’s government, which wants to draw foreign investment to the eight-year-old park to keep it from becoming a political football whenever tensions rise between the South and the North.

Despite the recent political upheavals in the North, including the purge and execution of Jang Song-thaek, uncle of leader Kim Jong-un, Pyongyang approved the foreign financial specialists’ visit.

Ibrahim Canakci, a Turkish Treasury representative, told Korean reporters that the complex was “impressive” without elaborating.

Many members of the delegation were visiting Seoul to attend a three-day G-20 conference that ended yesterday. Several South Korean government officials and camera crews from local media accompanied the delegation on their one-day visit.

At the Kaesong complex, the delegation was briefed on the current situation of the factory park, which was unilaterally shut by North Korea for about five months amid strained inter-Korean relations.

The visit was proposed by the South Korean government to lure foreign investors to the complex by promoting its cheap labor. All the companies in Kaesong are owned by South Koreans.

On the same day as the foreigners’ visit, negotiators from the two Koreas held a fourth-round, high-level meeting to discuss the so-called “internationalization” of the complex.

The South Korean negotiators proposed anew to hold a special seminar for foreign investors in late January at the Kaesong complex, which both sides previously organized but canceled due to frosty relations in mid-October. Pyongyang has not responded to the proposal yet.

Both Korean and foreign businessmen have pointed out that Kaesong badly needs infrastructure improvement, particularly in two major areas: deliberately primitive communications, in which use of cell phones and the Internet are prohibited, and strict customs procedures in which almost all cargo is inspected.

Both sides have agreed to start using a radio-frequency identification system for cargo going in and out, which will speed things up. The system will begin early next year.

“Both sides are cautious in launching the Internet in the complex, because it could be technically possible [for North Korea] to hack South Korean computers through the complex,” a South Korean government official told Korea JoongAng Daily.