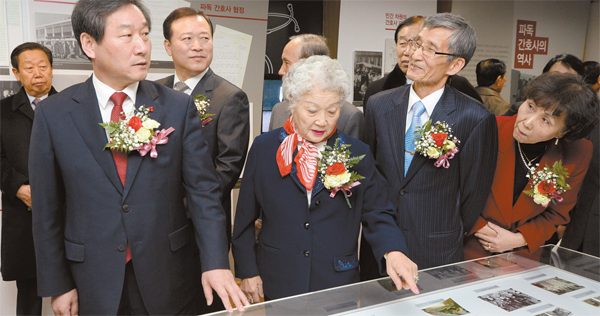 Visitors on Wednesday look around the exhibition “German Arirang,” held in the Seoul Metropolitan Library, which documents the lives of Korean nurses and miners who were dispatched to West Germany from 1963. [NEWS1]

Three silver-haired seniors watched an old video footage, which detailed an era half a century ago when groups of Koreans were dispatched to West Germany to work as nurses and miners. For them, it was a memory from the not so distant past, when postwar South Korea was struggling with poverty and starvation.

The film documented the conditions of the 1960s and ’70s, as well as President Park Chung Hee’s state visit to the coal mines and hospitals in 1964. The men could clearly remember those events and the hardships they faced at a time when Korea was one of the poorest countries in the world.

“I was there ...” said the oldest of the men, a 75-year-old man named Shim, referring to Park’s speech in the video. “And everybody cried when they saw President Park Chung Hee and the first lady.”

Tomorrow marks 50 years since the first groups of Koreans were sent to West Germany to work as miners or nurses following the 1950-53 Korean War. And in honor of the anniversary, the Seoul Metropolitan Library - located in the old City Hall building in central Seoul - is currently running “German Arirang,” an exhibition documenting the lives of those in the guest worker program, which was part of the labor recruitment agreement of 1963 between the two nations. The show, which kicked off Wednesday and runs until Dec. 29, showcases 150 documents from that period, collected by the National Archives of Korea.

“With the money we sent back home, our nation’s infrastructure was built,” said another former miner, Kim Oh-sik, 71. “I hope people don’t forget the miners and nurses who were dispatched to Germany.”

The three men spent time at the exhibition recently, viewing a map and pointing to the regions where they used to work. They are just a handful of the 7,936 Koreans sent abroad to work as miners between 1963 and 1977; an additional 11,057 were dispatched between 1966 and 1976, to be trained as nurses.

They learned new skills and earned money, returning back home when their limited-term contracts expired. Others decided to stay.

The earliest of the documents in the exhibition - a letter from a labor official at the Korean Embassy in Germany to key coal mining companies there - dates back to April 1963.

Those entities had started recruiting miners from Japan in 1957, and in the correspondence, the official requests that Koreans also be hired under the same conditions. Despite the fact that they had reached their capacity, the companies nevertheless responded affirmatively.

So with that, the first batch of 123 Koreans were sent to West Germany on Dec. 21, 1963, from Gimpo International Airport. Their flight took them to Anchorage, Alaska, where they then transferred to Dusseldorf.

Other documents include official mine and hospital association records, as well as the miners’ working schedules, a list of regulations and wage payments

“According to German records at that time, German miners’ wages were divided into 11 levels, and our miners received between three and five in terms of wage level,” said Lee Kang-soo, a researcher with the National Archives. “The German labor recruitment program was popular that so many people who were not miners applied to the program. So from the perspective of the Germans, our workmanship fell a bit.”

Those who applied for the workers’ program were often students or skilled workers unused to heavy labor underground. In the beginning, Korean nurses’ German-language skills were lacking, and they were often restricted to the most menial work, like cleaning corpses, and earned about 800 marks per month, or about 160,000 won at that time.

The National Archives said that these workers sent about $115.3 million won back to Korea between 1966 and 1976, helping advance the country’s economy during a period when it heavily relied on young expatriate workers to bring home foreign currency.