Lots of tots, no slots in Korean kindergartens

Lots of tots, no slots in Korean kindergartens 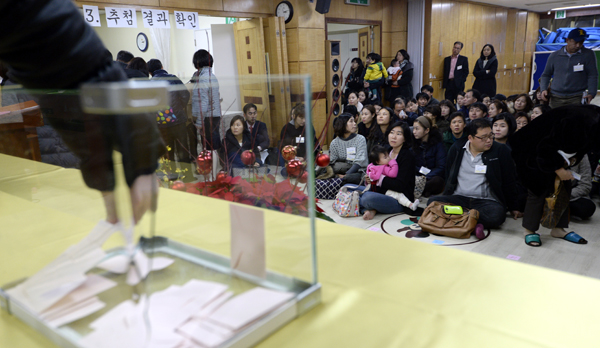 A parent who wishes to send her child to a private kindergarten in Seoul next year participates in a drawing earlier this month to secure one of the in-demand slots. [NEWS1]

All eyes in the school auditorium are fixed on a transparent box at the front, full of white and orange Ping-Pong balls. There are about 100 adults in the room, but no one is really talking and it is jarringly quiet. The room is tense, all because of those tiny balls - more specifically the orange ones. There’s a drawing going on. Pick an orange ball, your child secures a spot in the coveted kindergarten operated by Yeoneun Elementary School, in Eungam-dong, northern Seoul. Pick a white ball, and your child is out of luck, and the search goes on for a school. For these parents, it is as serious as a World Cup draw.

A heavy cloth is draped over the transparent box so no one can peak inside, and the drawing begins. There will be four rounds today - first the regular school for 4-year-olds and 5-year-olds, then for sections that include after-school programs, a hot item for working couples.

The first mother walks up to the front and puts her hand in the box. She picks an orange ball. She bursts into laughter and shows the ball off to people she doesn’t even know. The second mother also gets a lucky orange. But the third mother pulls out a white one. She drops her head with a deep sigh. She’ll need to keep trying. 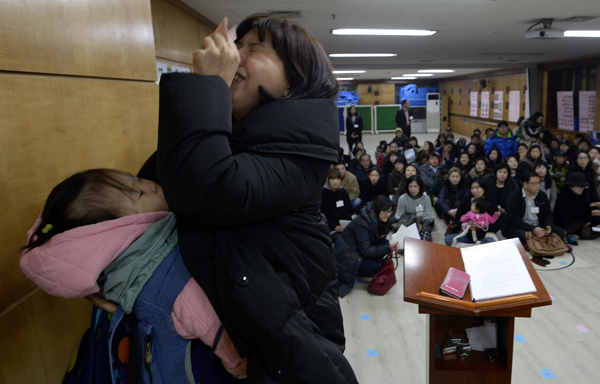 A mother is beaming with joy after she wins a kindergarten-selection lottery. [NEWS1]

It’s a ritual that is practiced all over Korea each November and December, as parents of children aged 3 to 5 desperately vie to get them into good kindergartens and day cares. Sometimes they use Ping-Pong balls. Other times, paper ballots. It’s a low-tech solution to such an important challenge.

With such stiff competition, there’s even a competition for the “most unfortunate woman” title. One woman applied for 10 kindergartens and failed to be accepted by any. But even for those who just apply to two or three schools, they all wonder why they have to consume so much time and energy to get their children into kindergarten.

The government does not keep exact records, but according to multiple news reports, there are about 1.4 million children eligible for kindergarten in Korea, and only 650,000 openings.

With the rise of two-income households over the past generation, demand for day care and kindergarten has steadily climbed, even though Korea’s fertility rate has declined drastically. Then with the introduction last year of education subsidies for children aged 3 to 5, demand has soared.

But this is a problem beyond just supply and demand. It’s also the result of the clash between the Ministry of Education, which runs Korea’s public kindergartens, the Ministry of Health and Welfare, which runs the nationwide day care centers, and private educational institutes, each determined to protect its own turf.

“You have no idea how fiercely we fight for our own interest,” said a kindergarten teacher in eastern Seoul named Kim. Kim wanted to protect her privacy, so she asked only her last name be used.

“The thing is, targets of the three groups are all the same, and they are constantly lobbying for their own interest. If the Education Ministry moves to launch a public kindergarten in one area, the other two parties try to stop it,” Kim said.

“The government couldn’t pay enough attention to early childhood education over the past years, so private kindergartens have been filling the void,” Lee said earlier this month on the radio show “Kim Hyun-jung’s News Show.”

“If a new public kindergarten is established, private kindergartens in the area have a hard time recruiting students,” said Lee.

“People don’t make a fuss when they enter elementary, middle and high school because public schools take the biggest share and they are firmly controlled by the Education Ministry,” said Kim. “But there is no boss or unified policy for early child education.”

The absence of the Education Ministry in the early child education arena also has widened the gap between the education quality of each kindergarten.

“Narrowing the gap between each kindergarten is probably the most urgent task,” said Han Yu-mi, a professor of early childhood education at Hoseo University. “Since each [private] kindergarten is very different in terms of education quality, even though they charge similar amounts of tuition, parents of course want to send their children to better institutes.

With school quality varying to widely, so does demand. Reputable kindergartens draw up to 300 applicants for just three or four openings, but other schools with a bad reputation fail to attract students.

Ping-Pong balls may seem like a strange way to select who gets into which school, but it is actually a new system, introduced just last year in order to help parents. Before that, many schools were first-come, first-served, and parents would line up for days to register their children into a kindergarten.

But now that acceptance into the best kindergartens can come down to the luck of a Ping-Pong ball, it’s no surprise people do all they can to boost their odds.

In order to increase the chance of getting into the right school, parents often enlist grandparents, uncles, aunts and other relatives into the application procedure, applying to as many schools as possible.

On the day of the draw at the Yeoneun Elementary School, the auditorium in which the drawing took place was filled with all sorts of family members, even though it was 3 p.m. on a Wednesday afternoon. 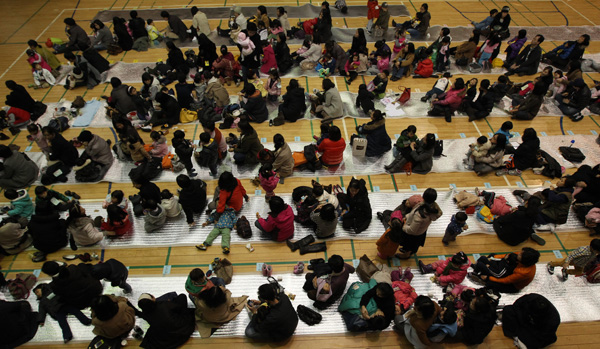 There were fathers and mothers clad in formal suits - probably taking a half-day off of work, just for the chance to select a ball. For parents who could not get out of work, there were grandmothers carrying toddlers on their backs.

Some even hire people to pick for them - selecting an orange ball means a bonus.

“I often see people who are hired by parents who can’t make it to the draw,” said Kim.

Some single-income families even resort to fabricating documents to increase the chance of getting into a kindergarten because some institutions give extra points to the children of working couples.

Kim Ki-hyun, a working mother with two boys who lives in east Pangyo, just south of Seoul, recently grew so frustrated with the time-consuming admission process for kindergartens that she took her complaints to the government. Kim fired off emails to 10 lawmakers and government bodies, including the Ministry of Gender Equality and Family, the education office in Seongnam and the education office in Gyeonggi Province, where Pangyo is located.

Kim said she experienced nothing but frustration from preparing her child for kindergarten.

It first started with just finding the schools located within walking distance of her home and checking the admission schedules for each kindergarten.

While juggling work and family, Kim had to fill out the long application forms for each school, each of which require such documents as her child’s health record and the employment certificates of her and her husband. After completing the forms, she had to visit the kindergarten in order to submit the form during her lunch.

She was also surprised to find some kindergartens only give out application forms to those who attend introductory presentations, which usually take place during the daytime on weekdays.

A week after from submitting the forms, Kim took a half-day off to attend the lotteries at each school.

“Let’s say I apply for five kindergartens,” she said. “Then I have to take 10 days off for five presentations and another five draws, which is absurd.”

She soon learned that there is an especially acute shortage of kindergartens in her neighborhood, and that many other women were going through the same hardship.

“I saw one of my neighbors who ended up living apart from her child because of the kindergarten,” said Kim. “She failed to get into a kindergarten in Pangyo, so her child had to live with her grandparents in Anyang. They only see each other on a weekly basis. Another neighbor sends her child to a kindergarten in Bundang, which is 30 minutes away by shuttle bus. That’s a long distance for a little child.”

After sending the lengthy email, Kim received a call from a school commissioner who is responsible for east Pangyo. But the call frustrated Kim even more.

“I asked her why there are so few kindergartens in Pangyo, and she said Seongnam City didn’t expect to see such a high demand for early child education when it devised the city plan for the area.

“She said there is nothing the city can do for us. The city development plan is already over and there are few remaining sites for educational institutions. She said private kindergartens can’t afford to buy the land because property prices are way too expensive here.”

Pangyo is one of the more expensive neighborhoods around Seoul, comparable with Gangnam District.

“I asked her to build more public kindergartens, but she said it was impossible, citing the budget.”

Responding to the shortage of kindergartens in some areas, the Ministry of Education admits that kindergartens have been established without thorough research until recently.

“There were no standards when setting up a kindergarten in the past,” said Yang Se-jin, an official in the early education department at the ministry. “That’s why we revised the early childhood education law in August last year. Under the revised law, the superintendent of the region must run a survey on the demand for kindergartens before opening one.”

With those explanations and no solutions, Kim decided to keep her child in day care for another year and try again to get him into kindergarten next year.

“It will be a tough game, but there is nothing to do but join the war once again,” Kim said.