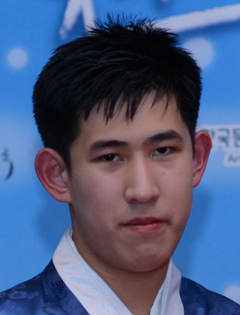 “I wish to become a pansori singer who delivers a sense of hope to others,” said Jang Seong-bin, a 15-year-old student enrolled at the Jeonju Arts School.

But Jang, who started learning the traditional narrative singing style known as pansori seven years ago, is different from other aspiring pansori singers his age, as he is mentally handicapped.

Jang often needs his mother when he talks to others so she can do a “translation.”

Against the odds, Jang became a fluent pansori singer onstage, thanks to endless practice, and has been recognized by the pansori community as an aspiring artist with potential.

Admitted to the Jeonju Fine Arts Middle School at the top of his class, he won the first award in the South Jeolla Pansori Competition in October. Jang is often praised for conveying acute emotions in his singing, despite his difficulty pronouncing some of the words.

Jang’s 51-year-old mother, Bae Im-nyun, says she first brought her son to a pansori lesson in 2006 as part of his speech therapy, in hope that it would improve Jang’s stuttering.

“Soon after he received lessons, my son showed impressive improvement in concentration and self-esteem,” she said. Then she decided to move from Daegu, their hometown, to Jeonju, North Jeolla, for him.

Bae said her son must work harder than ordinary singers to memorize all the words and to fix his stuttering when singing. Perfecting a single song can take as long as eight months.

“One time, a veteran pansori singer encouraged us to keep pursuing a career in pansori, telling us that my son had a great potential,” said Bae. “That compliment was a big encouragement for us.”

When asked why he likes singing pansori, Jang said, with the help of his mother, “I can feel a sense of sadness embodied by the main characters while singing. Expressing that sadness through singing makes me feel like I am letting go of my own sense of sadness down deep in my heart.”

To achieve his goal of becoming a renowned pansori singer, Jang hopes to study at Gukak National High School, which specializes in Korean traditional music, and go to the Korean National University of Arts.

“Many worry about the waning popularity of pansori. I really hope for pansori to become a new kind of K-pop to be loved by many people of all ages.”