Ministry announces its reshuffle of prosecution

Ministry announces its reshuffle of prosecution 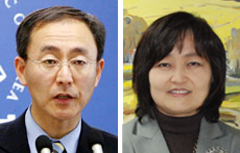 The Ministry of Justice announced late Thursday a reshuffle in the prosecution’s leadership, promoting a veteran prosecutor who led the recent anti-state crime investigation by a lawmaker to head the Seoul Central District Prosecutors’ Office.

According to the ministry, 45 senior prosecutors were promoted or reassigned to top positions in the prosecution. The reshuffle will officially take effect on Tuesday.

Kim, 54, headed the Suwon District Prosecutors’ Office this year and oversaw its investigation into Representative Lee Seok-ki of the Unified Progressive Party. Lee was indicted on charges of conspiring to overthrow the government in favor of North Korea.

A Daegu native, Kim passed the bar exam in 1984 and started his career as a judge at the Daegu District Court. Three years later, he became a prosecutor and served in various key positions.

In the reshuffle, Cho Hee-jin, 51, became the first woman to hold a director-level position in the prosecution in its entire 65 years. The elite prosecutor, who has set several precedents in the male-dominant prosecution, was promoted to become the deputy head of the Seoul High Prosecutors’ Office.

According to the ministry, 487 out of 1,926 prosecutors were women as of June 2013. Among them, 18 were serving in senior positions heading departments or branch offices.

Jung Byung-doo, head of the Incheon District Prosecutors’ Office, was appointed as a researcher at the Legal Research and Training Institute, the ministry said, taking into account that he would likely be a candidate for Supreme Court justice, earmarked for the prosecution. That appointment is scheduled to be made next year.