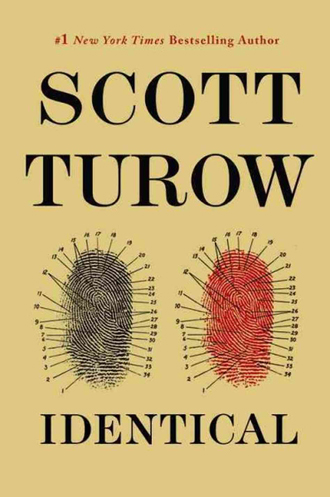 The story is loosely based on the myth of Castor, who is mortal, and his immortal brother Pollux, the twin sons of the Greek god Zeus. It includes key elements of Greek tragedy such as love, anger, devotion, deceit and incest.

According to the myth, when Castor was killed his surviving brother Pollux wanted to share his immortality with him so they would not be separated. Zeus granted the wish and the twins were transformed into the constellation Gemini.

In “Identical” one twin, Cass Giannis, is serving a prison sentence for a murder his brother Paul is sure he didn’t commit.

When Paul runs for mayor, the brother of the murder victim embarks on a television ad campaign to thrust the 25-year-old crime back into the limelight to hurt his candidacy.

Turow talked to Reuters about his writing career, his legal work and how he balances the two.


Q. Why do you think your books as so successful?

A. I like to think that one reason my books often succeed is that what the reader thinks is the mystery is not really the mystery. One thing that helped in this book is that the memory of the Greek myths we read in school has faded a little so the parallels are not immediately obvious to the reader.

Are you still a practicing lawyer?

Now I only do criminal law, dealing with accusations of wrongdoing, including lots of cases in front of the attorney registration commission. I’m a defense lawyer. So I’m defending attorneys who have been accused of wrong-doing, including judges, lawyers, hearing officers. I sometimes say I started out with a proctologist’s view of the profession.

I find it curious that lawyers, whose stock and trade is the law, would break it.

There’s nothing new about a public official making private use of his or her office. The motive of a briber, or a person who takes the bribe, though in a community like Chicago that sometimes goes beyond an individual. It’s an identity group thing, whether it’s a group of insiders or outsiders. It can have a very, very complex sociology. People can become convinced that this is just the way it’s done.

How do you keep the writing of legal fiction separate from the actual practice of law?

There are ethical constraints on what I can steal from life for my novels and that’s just as well. Even if you try to stick with reality, there will always be something that you don’t really know about people in real life. I don’t write about my clients. I don’t write about my cases. It’s much easier to let some small inspiration from reality take wing in a novel.

How do you structure your day?

I like to write in the morning and tend to other business in the afternoon. It’s not that exact. I probably write 45 minutes out of every hour. Email is a great distraction. If clients call, I can take care of that and go back to writing.

Most writers write in the morning, pretty much as soon as the coffee is out of the way. I think it has something to do with the passageways to dreams not being fully closed. I start while I’m on the second cup of coffee.

While I was writing “Identical,” I had a criminal case go to trial. That’s real work and doesn’t leave a lot of room for writing or anything else in your life.

Generally speaking, that pretty much occupied my life for three weeks.

Is there any difference in the way you feel about your work now as opposed to when you first began writing?