In Choo, Rangers get their man

In Choo, Rangers get their man 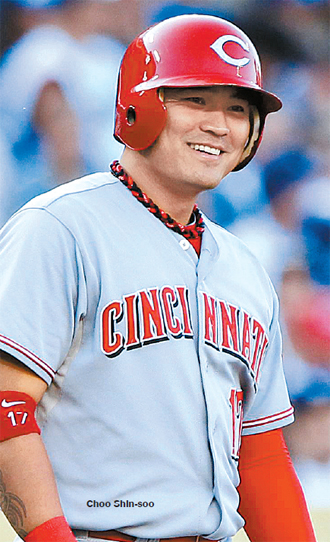 The official MLB website said Saturday that the Rangers, who failed to advance to the postseason for the first time in four years due to a weak offense, have made another “Texas-sized deal” by adding Choo after acquiring first baseman Prince Fielder from the Detroit Tigers through a trade. ESPN reported that Choo’s deal won’t be official until after a physical this week and will include a no-trade clause. Choo’s deal is the third-largest in this hot stove season after Robinson Cano’s 10-year, $240 million deal with the Seattle Mariners and Ellsbury’s seven-year, $153 million contract with the New York Yankees.

Sources told the Korea JoongAng Daily on condition of anonymity that Choo and the Rangers reached an agreement before the start of baseball’s winter meetings on Dec. 9. They said Rangers General Manager Jon Daniels visited Los Angeles on Dec. 3 when Choo was in town to meet with his agent, Scott Boras. Daniels at the time expressed the team’s strong desire to sign Choo and presented Rangers’ uniforms to him and his family.

Sources said Daniels offered a megadeal - though smaller than the final contract - the day after Ellsbury signed with the Yankees. But Boras was looking for an eight-year, $180 million deal. One source said the Yankees also made an offer the same day, but signed Carlos Beltran after Choo rejected a seven-year, $140 million proposal.

The sources also said offers came from the Seattle Mariners on Dec. 7 and the Arizona Diamondbacks on Dec. 8 before they acquired Mark Trumbo in a three-team trade. U.S. media outlets reported Choo responded positively to the D-Backs’ offer because he lives in Arizona, but sources close to Choo said he planned to move after this winter no matter where he plays next season.

The Rangers then offered a seven-year deal on Dec. 16 and upped the ante to $130 million on Saturday, which Choo and Boras accepted. One of the sources confirmed that the gap between Choo and the Rangers during negotiations was $10 million.

“Choo once seriously considered the Yanks’ offer,” a source told the Korea JoongAng Daily. “But he and his wife didn’t want their three children living in a crowded city like New York. Choo also believes the Rangers are closer to a World Series title than the Yanks.”

Choo, who hit .285 with 21 home runs and has a 54 RBI and 20 steals, is predicted to be the Rangers’ leadoff hitter due to his ability to get on base. Choo’s on-base percentage (OBP) last season was .423, the fourth-best OBP in the major leagues and second in the National League to former teammate Joey Votto of the Cincinnati Reds. Choo has averaged .389 OBP and .465 in slugging percentage in his career with a total of 101 home runs.

The Rangers expect Choo to produce scoring chances with Elvis Andrus, who is expected to bat second next season in front of Adrian Beltre and Fielder. The Rangers hit .262 with a .323 OBP this past season, falling from fourth to seventh in the major leagues.

The Rangers’ outfield is expected to be Choo in left, Leonys Martin in center and Alex Rios in right.

U.S. media outlets evaluated the Rangers’ signing of Choo as a huge plus for Manager Ron Washington’s lineup. CBS Sports and ESPN said Choo is the last piece of the puzzle for the Rangers to win their first World Series title. Choo is the second Korean player to sign with the Rangers after pitcher Park Chan-ho signed a five-year, $65 million deal in the 2002 hot stove season.