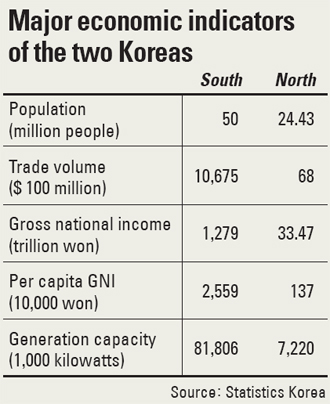 The per capita gross national income of North Korea stood at 1.37 million won ($1,292) last year, about an 18th of that of the South, according to a government report yesterday.

Statistics Korea’s report on the North Korean economy, released at the end of every year to help understand the economic status of the reclusive regime, showed the North’s GNI per person was slightly higher than in 2011, indicating some improvement.

The North’s total trade volume stood at $6.8 billion. The South’s was $1.67 trillion, roughly 157 times larger than the North’s.

In terms of power generation capacity, North Korea had 7.22 million kilowatts, which is about 11 times lower than the South’s 81.8 million, the report said.

The North produced 6.44 million tons of cement, about 7.3 times less than the South.

Steel production increased to 1.22 million tons in North Korea in 2012, while the South produced 69.1 million tons.

In coal production, the North surpassed the South with 25.8 million tons. The South produced 2.09 million tons.

The population of North Korea is about half of the South’s, marking 24 million. The South’s population recorded 50 million last year.