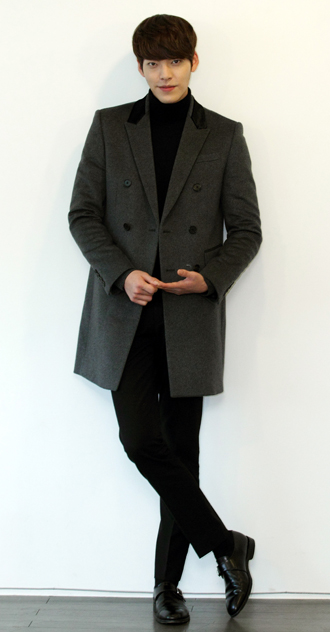 It is hard to talk about the recently ended SBS drama “The Inheritors” without mentioning actor Kim Woo-bin, who played the rebellious character Choi Yeong-do on the program.

Although he was a supporting actor in the drama, he performed almost like a lead character, especially when it came to showing his love toward Cha Eun-sang, played by actress Park Shin-hye.

Sometimes he was childish and harassed Cha, but at other times he became more manly, as if he would sacrifice everything for her.

His acting even made some viewers request that the production company write a happy ending between him and Cha, pushing aside the male lead character played by actor Lee Min-ho.

However, the model-turned-actor is still not very used to being the center of attention or being on the way to becoming one of the top stars in Korea.

He sat down with Ilgan Sports, an affiliate of the Korea JoongAng Daily, to share what he thinks about the drama that put him on the map.

Q. What do you feel about being the beneficiary of the drama?

A. I’m very thankful for writer Kim Eun-sook. I’m thankful that she wrote a lot of lines for me, and made my character more [memorable.] I’m thankful for viewers and reporters. I didn’t know that I would receive such a lot of encouragement.

Do you sense that you have become popular?

Because we were filming the drama as if we were going live, I didn’t know much about it before.

Some time ago, I was filming at a convenience store in Pyeongchang-dong [northern Seoul] and someone that looked to be in his 70s called me, saying, “Hi, Choi Yeong-do.” There have been rarely any elderly people who would recognize me except my own grandmother, but I was surprised to know that he even knew the name of my character. I was so happy so I ran to him and said hi back to him. And I started to realize it a lot more as many people gather whenever I attend some events.

Is your character similar to you?

First of all, I don’t think I would harass anyone I like. I’m generally nice to people I like. I often say “I love you,” to close friends.

You acting skills got a lot better. What is your secret?

My acting teacher told me to write down 100 questions my character would ask and also the answers to those questions to have a better understanding about the character. I have done that since my debut and I did it again this time. That helped me a lot with understanding Yeong-do.

Did you add many impromptu lines or actions?

I mostly followed what was written on the script. I did some ad-libs such as making some peculiar noises between my lines.

What was it like to be on a filming set?

I had fun filming as there were many actors and actresses of my age. I got close with Hyung-sik of ZE:A the most. We have said that we should try to win an award for the best couple category at the end of the year. I got close with Lee Min-ho and others, including Min-hyuk [of the boy band CN Blue], Krystal [of the girl group f(x)]and Park Shin-hye. I was thankful that the younger actresses took good care of me as if they were older.

Don’t you think that too many of your characters are rebellious?

I try not to think about that. I have actually done a variety of characters, but people just don’t know about those. Only the pieces in which I was a rebel became great hits and everyone seems to remember those images.

What is your plan from now on?

I have never missed walking on the catwalk for fashion week since my debut. However, I didn’t get to do it this season. From the next one, I’m going to try to be onstage at least once. Being a model made me want to act, so I’m thankful for being a model. And that’s why I don’t ever want to let go of being one. I want to do a romantic piece, and also want to do a family-oriented one. I need to set some more specific plans for next year before this year ends.