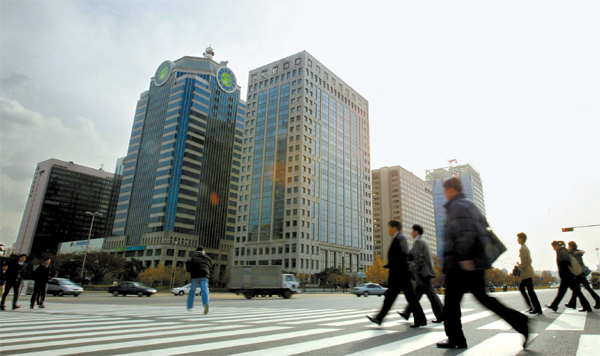 Passersby cross a street in Yeouido, western Seoul, where the headquarters of various brokerage firms are clustered. With four out of Korea’s biggest brokerages up for sale, experts predict a reshaping of the industry. [JoongAngIlbo]

The country’s securities industry is expected to undergo major changes next year with several mergers and acquisitions taking place among big and small brokerages.

Currently, four of the 10 securities brokerages based on quality capital are either for sale or planned to be sold. They are Woori Investment and Securities, Tongyang Securities, Hyundai Securities and KDB Daewoo Securities.

The spotlight was on the brokerage firm M&A market over the weekend when Hyundai Group, the country’s 20th-largest conglomerate, announced it would sell Hyundai Securities, Hyundai Asset Management and Hyundai Savings Bank to raise as much as 1 trillion won ($942 million)

Industry sources note that whoever becomes the new owner of Hyundai Securities - and the three other brokerage firms that are for sale - will change the overall landscape of the industry.

It was Woori Investment and Securities, the country’s largest financial group, that was first in the market following the Financial Services Commission’s announcement of the its privatization plan. 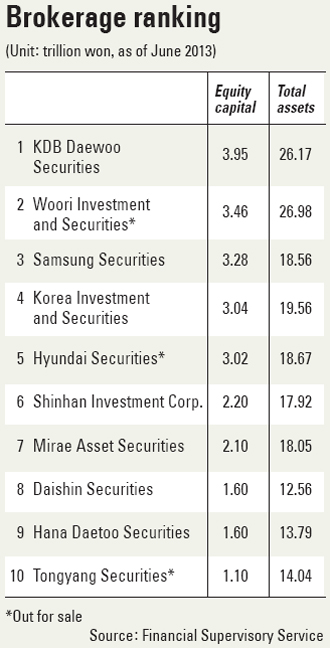 The securities firm was officially put up for sale in August and KB Financial Group, NH Nonghyup Financial Group and an alternative investment firm called PineStreet Group have submitted bids. The preferred bidder was expected to be chosen last Friday. However, the announcement was delayed.

Woori Investment and Securities was considered one of the hottest items among not only Woori Financial Group affiliates but also on this year’s M&A scene.

The brokerage firm is the largest among industry players by total assets and second largest based on equity capital after KDB Daewoo Securities. For financial companies whose businesses are largely focused on the banking sector, Woori Investment and Securities is considered a way to diversify their businesses.

Just a few weeks after Woori Investment and Securities was put up for sale, the FSC also hinted that KDB Daewoo Securities would be sold in the future.

“KDB Daewoo Securities will be out for sale sometime next year after the sale of Woori Investment and Securities is complete,” said an industry source.

The source said the FSC back then told reporters it would hold onto its stake in KDB Daewoo Securities for now because it doesn’t want to disrupt its attempt to sell Woori Investment and Securities.

Meanwhile, Tongyang Securities showed up on the industry’s to-be-sold list as its owner, Tongyang Group, is suffering from a liquidity shortage. An official from KB Financial Group said the group is considering various options that include submitting a bid to buy Tongyang Securities, emphasizing that “nothing has been decided as of yet.”

It remains to be seen, however, whether the M&A market in the brokerage industry will gain steam, which is what the government is hoping for.

The FSC in October approved five local brokerage firms with more than 3 trillion won worth of equity capital to be allowed to carry out their own investment banking businesses and become prime brokers like Goldman Sachs or Morgan Stanley.

Boosting M&As in the market and merging smaller players with bigger players will allow more brokerage firms to be eligible to offer prime brokerage services as their equity capital increases to more than 3 trillion won.

Despite the government’s wishes, the M&A market has not yet shown signs of renewed momentum.

Last Friday, the atmosphere was tense at Woori Financial Group’s board of directors meeting as the government agency in charge of privatizing the group and board members reportedly failed to reach an agreement on choosing a preferred bidder for Woori Investment and Securities. They had been instructed to choose a preferred bidder.

“The decision was delayed because directors thought the issue should be discussed thoroughly by taking into account various options rather than simply choosing a preferred bidder for the sake of doing so,” said an official from Woori Financial Group.

“Although specific dates when the directors will meet again haven’t been decided, we’re hoping that a preferred bidder will be chosen before the year ends.”

Industry sources note that the government and board members had different opinions on how the sales should proceed, whether in a package that includes other securities affiliates part of Woori Financial Group or separately.

The sales of Hyundai Securities also is expected to be tough to complete.