Blockbuster year puts CGV at No. 5 in world

Blockbuster year puts CGV at No. 5 in world 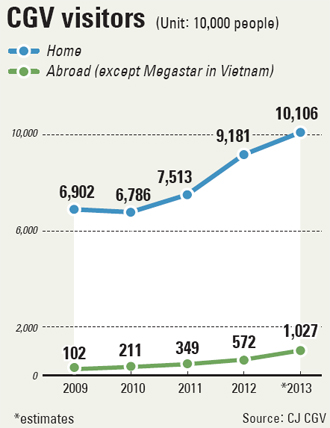 CJ CGV, Korea’s leading multiplex cinema operator, said yesterday it expects to be No. 5 in the global theater industry by the end of 2013.

The cinema group estimates it will sell more than 100 million tickets this year at home and abroad, placing it behind only Regal Cinemas, AMC, Cinemark and Cinepolis of Mexico.

Since opening its multiplex in Shanghai in October 2006, it has expanded to 40 theaters with 296 screens in China, United States and Vietnam. Foreign locations represent 24 percent of its total screens.

Its 4DX theaters, which have 87 percent of the global market, have expanded to 90 screens in 22 countries.

Overseas business is expected to rise to 30 percent of CGV’s total next year with the acquisition of Megastar in Vietnam.

“As CGV has entered in the global top five, we will continue to accelerate overseas expansion so CGV’s Korean multiplex culture will spread around the world,” said Seo Jeong, CEO of CJ CGV.

CGV aims to become the world’s largest multiplex group by 2020.

Since CGV introduced the multiplex in Korea in 1998, the so-called block-booking system, in which one movie is screened at one theater, was dismantled. Movies were screened at several movie theaters and Korean films began to grow both in quantity and quality.

The company said that in 1997, before it opened its first CGV multiplex, only 2.5 moviegoers out of 10 watched Korean movies. Today, the audience for Korean films is expected to reach about 60 percent at CGV this year.

The number of movie tickets sold in the country this year exceeded 200 million as of Dec. 18.

Accordingly, the average number of movies attended per person was a world-leading 4.12 in Korea, ahead of 3.88 in the United States, 3.75 in Australia and 3.44 in France.

However, CGV also said that the figures indicate that the domestic market is becoming saturated.

In case of the United States, movies per person peaked at 5.13 in 2002. CJ CGV suggested that expansion in the global market could sustain the Korean film industry’s growth.

The cinema industry, which traditionally has been regarded as a domestic business, is changing its paradigm through global mergers and acquisitions.

China’s Wanda Group acquired U.S.-based AMC to operate 479 theaters and more than 6,000 screens in six countries in North America and Europe, and to emerge as the world’s second-largest operator.

CGV said it aims to become the cornerstone in creating a Hallyu, or Korean wave, cinema belt by establishing a theater network in the rapidly growing Asian market.