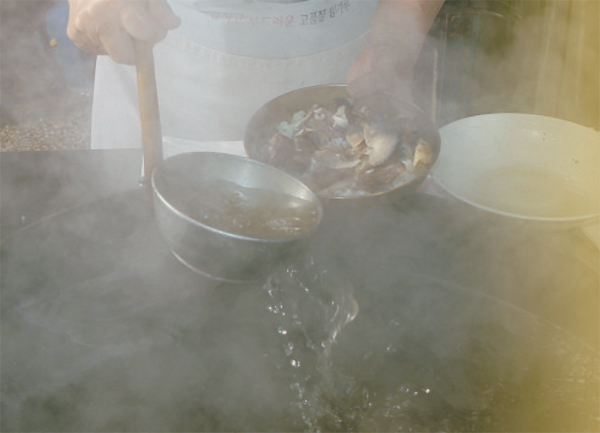 Powdered soup mix for gomtang, or beef bone soup, has become a hot item in Korea thanks to drastically falling prices.

Dahanoo, a Korean beef-products company, is now selling sets of 13 gomtang packages, enough for 26 servings, for just 39,900 won ($37.60). That works out to just 1,500 won per serving, about the cost of a premium packet of instant noodles.

As the price of Korean beef products plunges, many food companies are jumping into the gomjang business. Midsized food companies such as Seojeong Cooking and Gangsullai as well as Gosam Nonghyup, a national agricultural cooperative federation based in Gosam, Gyeonggi, have all introduced powdered gomjang packages made from 100 percent Korean beef.

Large retailers are also introducing their own in-house brands of gomjang. E-Mart’s version recently posted record-high sales of 30,000 packs in one week. Lotte Mart and Homeplus also have also introduced their own versions of gomjang mix. 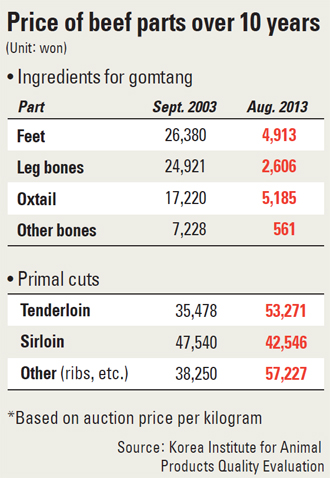 Dahanoo is not just selling soup mix, but it is setting up stores just for its brand of Korean beef products, with the goal of establishing 200 stores nationwide.

The rise in Korean beef products is being spurred by a dramatic fall in beef ingredients, such as leg bones and tails, which are down to nearly one-tenth their prices from 10 years ago.

The fall comes because of the soaring popularity of high-end cuts of meat these days, such as tenderloin, rib eye and sirloin. Those cuts account for just 7 percent of the weight from one head of cattle but make up 45 percent of each animal’s price - a big rise from 30 percent in 2003.

Cattle leg bones, hooves, tails and other products account for about 50 percent of the weight of an animal.

Along with the drastic decline in prices of the by-products, changes in food culture have also contributed to the emerging gomtang business.

Gomtang is difficult to be cooked at home - it needs to be boiled overnight - especially for people who live in apartments, further rising demand for ready-to-make mixes.

“Due to the changes in homes, an increasing number of households would rather buy gomtang soup mix than make it themselves like kimchi,” said a food industry insider.

According to a market analysis by the market research firm AC Nielsen in September, the instant stew market was worth 32 billion won.

Domestic food company Ottogi is the No. 1 in the market, accounting for 81.5 percent of the market share.

In the case of Ottogi, it built a factory in New Zealand in 1998, when the prices of Korean beef by-products were as high as tenderloin and sirloin.

“We are paying close attention to the popularity of 100-percent Korean beef gomtang mix in the domestic market,” said a spokesperson for Ottogi.

“After watching the prices of the by-products closely, seeing whether they will maintain their low prices for the long term, we will reconsider our ingredients suppliers and production base.