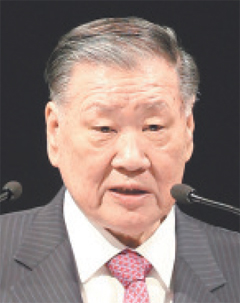 Hyundai Motor Group Chairman Chung Mong-koo urged employees to prepare for what he believes will be a new growth phase for the global automobile market in 2014.

Chung, who runs the world’s fifth-largest automotive group, met with 60 overseas unit chiefs of Hyundai Motor and Kia Motors yesterday at company headquarters in Yangjae-dong, southern Seoul. The meeting was originally scheduled last week but was postponed when the 75-year-old Chung caught a cold.

Hyundai and Kia sold 6.9 million vehicles worldwide through November, up 6 percent from a year ago. The group set a sales target of 7.41 million units for this year but hopes to reach 7.5 million units.

Chung said that with the beginning of stimulus tapering by the U.S. Fed, Hyundai needs to be aware of changes in both demand and currency rates. He urged the company to strengthen it basics.

“Next year is an important year because Hyundai and Kia’s premium models, as well as other strategic new models, will be released in the global market,” said Chung. “Only automakers that can act at the right time amid change can survive global competition.”

According to a report from Korea Automobile Research Institute (KARI), the 2014 global auto market is expected to grow 4.1 percent from this year, but Hyundai said the business environment doesn’t seem to be positive because competition will heat up.

Hyundai said Japanese automakers are marketing aggressively, backed by the weak yen, while European companies are recovering after restructuring.